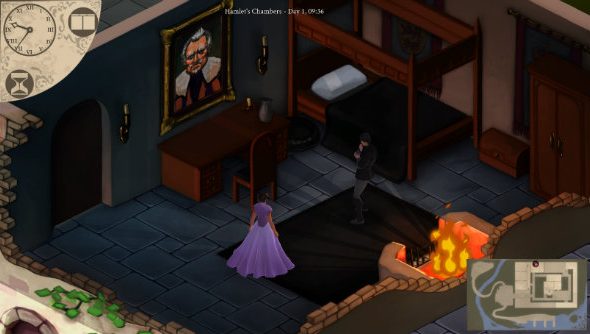 Elsinore looks like an interesting one. A time-looping adventure game set within Shakespeare’s Hamlet, Elsinore casts you as Hamlet’s ex, a Danish noblewoman called Ophelia, who awakens after a vision shows her the death of everyone in Elsinore Castle. Ophelia has four days to change fate, but events keep looping like Groundhog Day, getting more desperate and tangled the more she interferes.

That’s another one for the upcoming PC games list.

At GDC, Elsinore writer and team lead Katie Chironis described the game as the result of smashing Hamlet together with the impending doom and looping time mechanics of The Legend of Zelda: Majora’s Mask. Obviously, there’s more in common with traditional adventure games than Nintendo’s action-RPG, but they both share the same repetition, the player learning more about the game and its world with each loop.

In Elsinore, you’ll build up an inventory of information as you discover more about events and characters, giving you extra dialogue options as you progress. So, you may learn something about someone on day four, and then when day one loops around again you might have the option to deploy that knowledge and prevent something from happening later on, branching the future off in another direction.

“In many ways Elsinore is sort of born of ‘what if?’,” said Chironis. “Most of us on the team work in game development for our day jobs, and we wanted to explore this concept of tragedy replayed. You think of tragedy as sort of this concept of a group of characters or a protagonist doing everything in their power to try and create a good outcome, but everything goes to shit.”

Because the developers wanted to create the feeling of being an active part in a Shakespearean tragedy, they really dug into the source matierial, researching what scholars think of the play, the characters, and using that information to apply new layers to the characters – layers that will only be peeled back becuase of the fresh circumstances they see themselves faced with because of the player’s actions interrupting the original script. What would Gertrude, Queen of Denmark, be like if she didn’t succumb to poisoning in Act 5? These are the kinds of questions Elsinore will be answering.

From the developer’s GDC chat, it sounds like the game will do its best to make your fate tampering seem futile, however, every change rippling and creating unforeseen outcomes that are just as bad, if not worse, than what destiny originally had planned. “I think Elsinore works best as an outlier,” concludes Chironis. “I think it works best as a… You know, in a world where there are games that empower the player, and lift them up, and allow them to excell, Elsinore says f**k you. Maybe there’s some power in that.”

Check out the game’s progress on Elsinore’s official site.