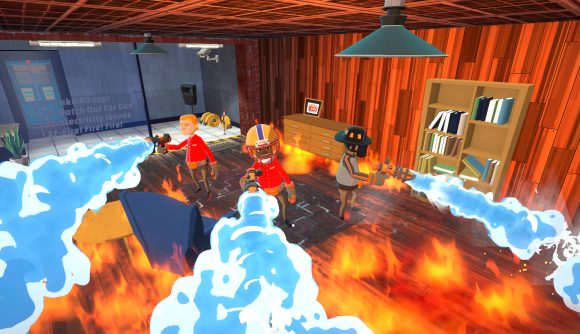 As we increasingly rely on delivery and ride-sharing apps to connect us with basic goods and services, it’s worth wondering how that system might play out applied to other public utilities – venture capitalists in the tech sector, after all, are measuring the drapes on services like public transportation and education. Embr is a game that provides a satirical peek at what “Uber, but for fighting fires” might look like.

As a game, Embr is a manic co-op affair for up to four players – start out thinking Overcooked or Moving Out and you’ll be in the right neighborhood. The action has you barreling into residential conflagrations armed only with a hose and some instructions gleaned from your firefighting app. You’ve got to try to put out the fire, sure, but the important thing is to make sure you get paid.

“With Embr, we set out to shine a satirical alight on the gig economy – not in terms of the people making those deliveries and driving those taxis, but rather the companies at the top powering this particular brand of venture capitalism and deregulation,” said Howard Tsao, the team lead for Embr at Muse Games. “On a gameplay basis, we also wanted to see just what mayhem would occur if the untrained masses headed out with a hose and tried to put out fires in the same way people deliver take-out or drive people around in makeshift taxis.” 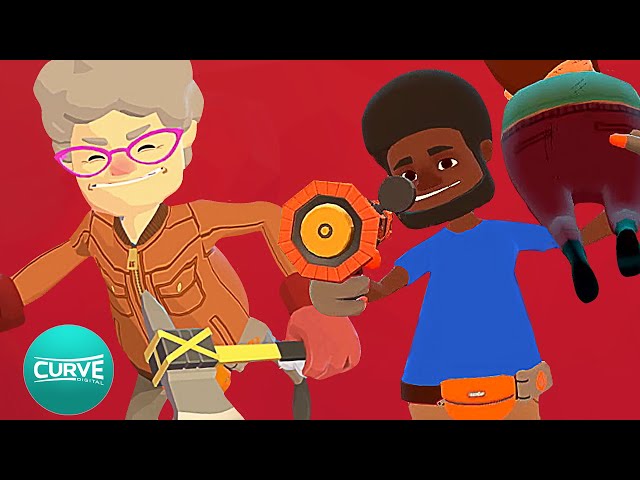 “The end result is just as fun and frenetic as we thought it would be,” Tsao said. “It just makes you appreciate what a difficult and almost impossible job real-life firefighters do.”

You’ll have to rush to put out fires, potentially stealing anything salvageable in the process, and spend the money you ‘earn’ on upgrades to your firefighting equipment – after all, you’ve got to keep up with rival firefighting app Hosr (naturally, it’s a Canadian outfit).

Embr launched in early access on Steam and Stadia this week, and publisher Curve Digital says cross-platform multiplayer is enabled, as well as iCUE integration for PC players with Corsair peripherals installed. Muse says it plans on “expanding the game significantly” while Embr is in early access.

For more fun with friends, check out our list of the best co-op games on PC in 2020.