In rarefied corners of the internet, on forums and community hubs, Oculus Rift adopters are sharing their learnings – and beginning to enforce an implicit list of dos and don’ts. But the Emmerholt team are breaking the early laws of VR.

“Now if you make anything and post it and it breaks these rules, people get angry about them,” says Cherry Pie Games director Jeremy Boggs. “It’s kind of ridiculous in my personal opinion.”

Emmerholt eschews the enclosed spaces of the prototypical VR demo for wide-open questing. And not for Cherry Pie the pedestrianism designed to dodge simulation sickness. They want your first VR experience to encompass hand-tracked spellcasting and horseback adventure. 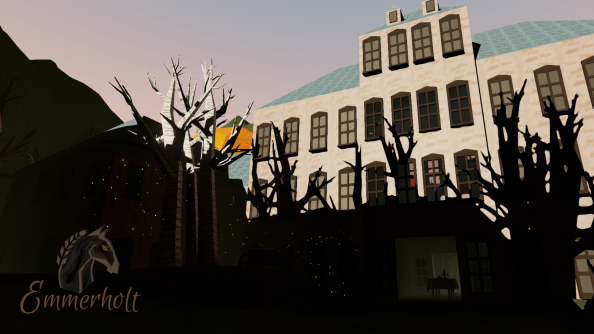 Cherry Pie Games were founded on VR. The six-strong team in downtown Orlando studied game design together at the University of Central Florida – and hopped aboard the Rift train early after acquiring a DK1 in 2013.

“It’s that moment when you put on the headset for the first time,” remembers Boggs. “And all of a sudden you just think of the possibilities.”

Their first attempt was “horrible” – about a child exploring a house, and thrown out when a very similar game was announced. But a series of successes at local jams fuelled their confidence. A temple-set puzzle platformer that played with 3D space won the whole team DK1s, and they set about exploring the tech with renewed purpose.

By the summer of last year, Boggs had picked up a Leap Motion controller – which tracks the player’s hands in a fashion reminiscent of Kinect. And with the encouragement of the company behind it, the team made a prototype based on the Sleepy Hollow legend. Players carried a lantern in their hands – lifting and turning it to illuminate the low-poly environments.

“In its current state I’d say it’s still a bit finicky – it’s not the most precise thing in the world,” says Boggs of hand-tracking. “But it’s great. We love the motion and we want to use it in everything. It’ll only get better from here, so it’s definitely the way to go.” 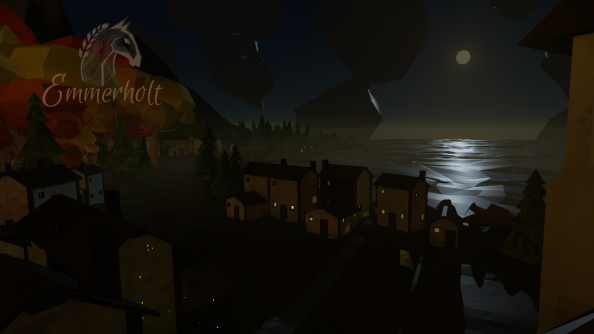 Taking Hollow as their foundation, the team began work on Emmerholt and became a company – perhaps one of the first to be formed with the driving purpose of making games in VR.

“That’s definitely our philosophy,” reckons Boggs. “Or where we want to be with our philosophy, we’re not exactly there yet. A lot of games right now it’s like, ‘Here’s a game, now we’re going to slap VR onto it’. And some of them are pretty decent, but none of them were made expressly for the new platforms. We want to create the entire game from the ground up for VR and new technologies.”

Emmerholt will be playable without VR or Leap Motion, but has been designed entirely around that hardware. The game takes its name from an endangered village that acts as the central hub of an explorable world.

“We want to tell a visual narrative,” explains Boggs. “We have this piece of technology that lets you look all around.”

You’ll travel along shores and through woodland in search of relics – magic items needed to defeat Emmerholt’s (mysterious, TBD) antagonist. There’ll be a story arc, and Cherry Pie are plotting a series of side stories – which will vary according to the studio’s unusual world-building system. 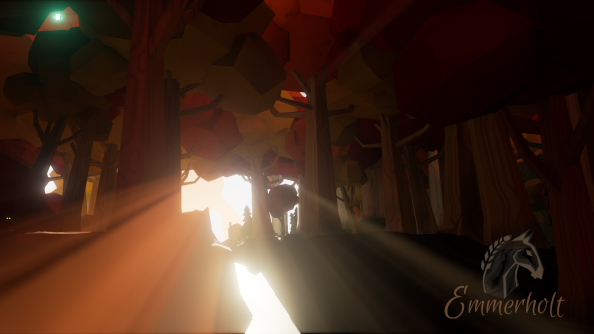 Before you begin the game, large segments of the world will lie empty. But once you do, they’ll be filled in at random with chunks of land. Quests are tied to each chunk – so on your first playthrough, you mind find Quest A in the north and Quest B in the south. But on your second, Quest A might lie to the south, and a Quest C to the north – with Quest B nowhere to be found.

To solve them, you’ll call on a set of spells and abilities, as well as any capacity you might have for unravelling puzzles – Emmerholt will test your brain as well as your hands.

Depending on which side stories you finish and relics you find, the ending will also alter every so slightly. The idea is that players – especially those new to the peculiar feelings brought on by VR – will have reason to return for several short sessions.

“There’s going to be a little bit of a different playthrough every time in that regard,” says Boggs. “Though we’re trying to make Emmerholt one of the first VR games where you won’t want to take it off right away. Maybe you’ll go 30 minutes, longer than the usual – and that’s why we’re focusing on an immersive story.” 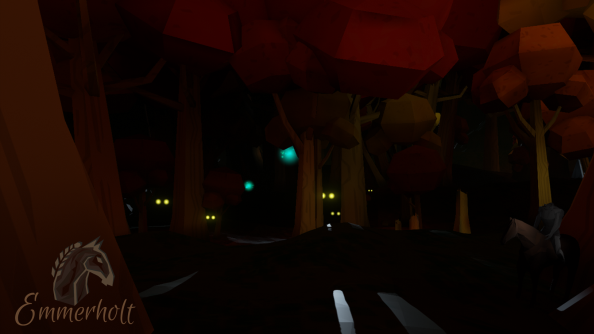 That story will, in some form, involve a horse. In Emmerholt, you’ll get about the world by equine means – steering your steed in first-person by pulling at the air to manipulate reins.

“We thought it would be really cool if the player’s best friend is their horse,” explains Boggs.

Surely Cherry Pie have looked to the best in the stable of horseback gaming? Red Dead and The Witcher?

“Sort of,” says the director. “I haven’t played through all of The Witcher yet, so I don’t know how much of a personal attachment Geralt gets to Roach. But I think our horse will come into the story a bit more than in some of those games.”

Implementing hand-tracking in tandem with VR has required the team to “really think” about their design – but they’re prepared to part from received wisdom where necessary. Hollow had a carriage sequence which presented a peculiar problem: one of the ‘rules’ of VR is that you don’t force head movement, for fear of making the player sick. But horse-drawn carriages are anything but steady – and Cherry Pie built their carriage in kind. 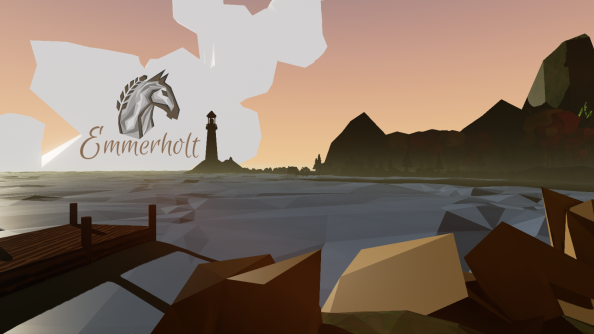 “It made the game a lot better, and it had to be designed that way,” says Boggs. “If we didn’t have that, it would feel really weird. People enjoyed it – they didn’t realise that we were forcing the movement because that’s how they expected it to be. So there’s a lot of really weird decision decisions around a lot of stuff that people might not even realise we’re making.”

VR communities are doing a wondering job of disseminating their findings and giving new developers advice. But perhaps it is a little early for this nascent field to start drawing up commandments.

Boggs nods. “There should be no rules.”

Emmerholt is in development for the PC, and Cherry Pie hope to support a variety of devices. Unreal Engine 4 development is now free.

In this sponsored series, we’re looking at how game developers are taking advantage of Unreal Engine 4 to create a new generation of PC games. With thanks to Epic Games and Cherry Pie Games.