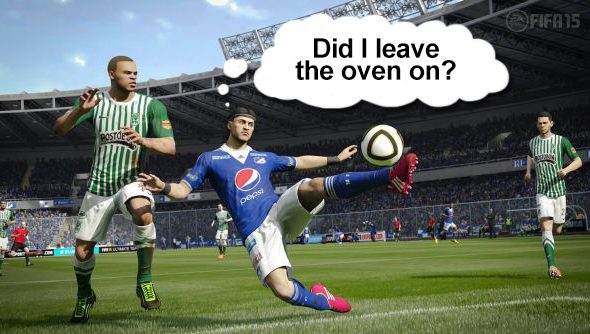 EA has just announced that the next FIFA game will introduce simulated player emotions, imbuing the tiny football men with every manner of mood and feeling known to science, transforming them from glassy eyed 3D automatons to living, breathing virtual creatures each with their own hopes and ambitions.

For example: one football man, upon doing an especially good kick, might feel “happy”. Another, having witnessed a nice goal, might feel “humbled by the continuing spectacle of sport”. It truly is an incredible time to be alive, and having now emulated the human condition down to the individual neuron, EA can finally create little football men capable of kicking the ball in a truly convincing manner.

But what emotions can we expect to see in FIFA 15, and what effects do they have on players? I’m glad you asked, because here they all are.

Your player will become afraid of many of the most rudimentary elements of the game of football. Spheres become harrowing fright-balls, grass becomes a wretched green blanket of chlorophyllic nightmares. Your player will even fear the net itself, sprinting away from it only to find, to his unending horror, that there’s another one at the opposite end of the pitch. His attempts to flee parallel to the goal-line are then scuppered by his even greater fear of advertising hoardings. The player is uncontrollable and screaming during these episodes.

Your player has a 33% chance of stopping play and picking up the ball in order to inspect it more closely. There is a 2% chance he will pick up a blade of grass, place it between the narrow gap created when the thumbs of both hands are positioned against one another side by side, and blow to create a high-pitched whistle.

Your player has a 15% chance of hallucinating another player as a giant turkey leg. To offset this, he gains the ability to float along smell lines generated by any fresh pies on the pitch.

Your player loses 22% of his sprinting speed and becomes 45% less accurate during corner kicks as he is momentarily distracted by the pervading sense that a total stranger just wrote a tweet about how your player’s inflated salary could pay for three hundred hospital beds in a ward in Lancashire. 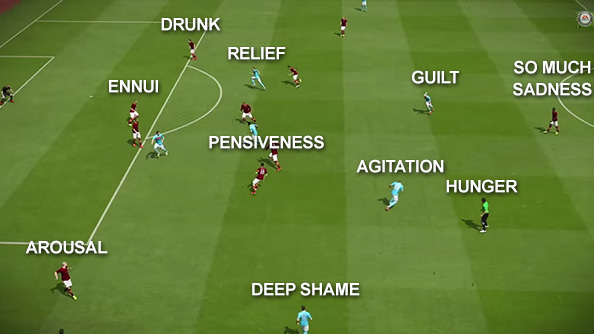 Has little to no effect on your player’s performance, though he will become drastically less likely to join in celebrations of goals that aren’t his own. Player has a 4% chance of clapping sarcastically while saying one of the following insincere compliments: “yeah I suppose you could call that a goal”, “good job, for a big idiot” and “if goals were ducks, I wouldn’t like to hear that one quack if you know what I mean”.

Your player will spin on the spot, occasionally attacking his own teammates or casting healing spells on enemy players.

The inexorable melting of our polar ice caps gives your goalkeeper a 60% chance of his gloves flying off.

UNSHAKEABLE WORRY THAT YOU’VE FORGOTTEN SOMETHING, BUT YOU DON’T KNOW WHAT

Your player will stand still for a moment with his hands on his pockets, looking vacantly into space while silently mouthing the word “keys”. He’ll turn his head to the other side, pat both pockets and say the word “no” aloud, before placing his hand in his back pocket. A teammate will ask “what is it?”, but your player will ignore him, instead raising his hand to his forehead, muttering “did I…” and just trailing off.

“What have you forgotten?” the teammate will insist a second time. Your player will look at him quietly for one moment, before his expression switches to one of mild anguish. “Debit caaaard!” he’ll exclaim. Your player suffers a 17% accuracy penalty during this emotion.

A PROFOUND SENSE OF THE INFINITE SCALE OF THE UNIVERSE

Your player will immediately go limp, slumping to the pitch with mouth agape as, for just a fraction of a second, he understands the incomprehensible scale of our universe. All at once your player is consumed by his own unfathomably insignificant existence, and cannot take any free kicks for up to ten minutes.