The new strategy game from Romero Games is garnering a lot of attention due to its XCOM-like combat, but after seeing Empire of Sin at E3 2019, it’s clear there’s a lot more going on under the hood to excite strategy gamers of all types.

Your goal is to dominate Prohibition-era Chicago. Starting as a lone mobster with no assets, you’ll grow your faction into a criminal corporation running everything from breweries to brothels. This involves both tactical and strategic decisions – commanding your units and managing your empire – and what makes Empire of Sin special is that there’s no schism between the two. You get to manage every aspect, from the abilities and weapons used by your crew, all the way up to your faction’s alliances and rackets.

From the off, you control your chosen mob boss – a certain Alphonse Capone, in our case – having recently arrived with the intention of taking over the town. Your first move is to take a look at the world map, which offers a 3D overview of Chicago, highlighting enemy factions and rackets you can attempt to seize. We select a low-level speakeasy run by rival boss Ronnie O’Neill, which is just a short stroll down the street – when we become more notorious, walking around in public will carry a lot of risk, but for now it’s fine.

Inside the speakeasy we can spot three guards, as well as a few chattering patrons and a jazz band in the corner. The interior is warm and lively, with gorgeous detailing wherever you look, but we’re here to shoot the place up, see, and as Al Capone there’s only one tool to get the job done: the Tommy Gun. Upon entering combat the UI transforms: the floor is covered with a grid, the turn order unfurls across the top of the screen, and bar furniture is highlighted with its usefulness as cover. 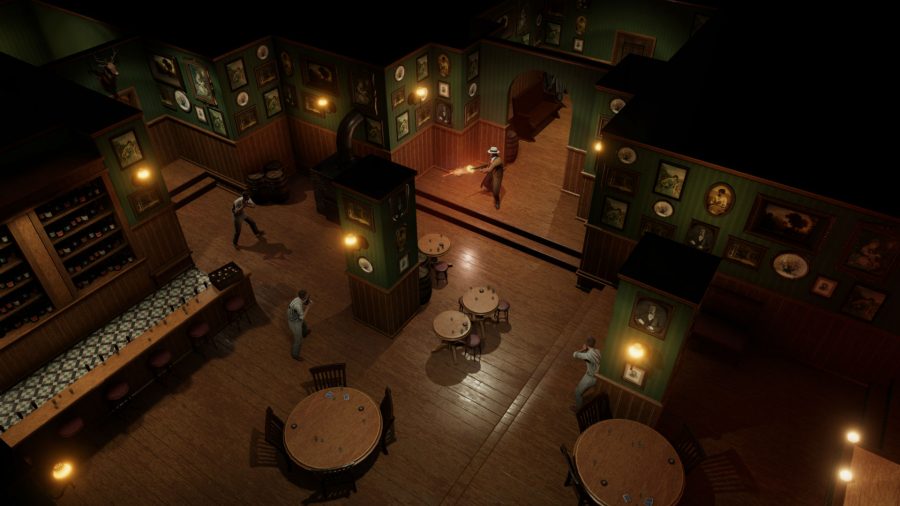 Each of Empire of Sin’s 14 mob bosses has unique combat abilities, and ours – the Tommy Gun sweep – is very Capone. Right off the bat two of the guards are mown down, leaving only one to deal with, but it’s their turn and they manage to wing us with a couple of shots. We put them down with an accurate burst-fire attack, leaving them bleeding out, and us with the option to finish them off with a bloody execution. It’s not all style though; if you execute all your enemies you’ll acquire the Serial Killer trait, which makes you more dangerous in combat, but comes with some significant disadvantages. Not many people want to be friends with a serial killer, and you definitely shouldn’t leave one in a room unsupervised.

With the speakeasy seized, it’s time to start managing it. First off, we hire some guards to protect the bar, then we upgrade the decor. This will attract a higher class of clientele, ultimately making us more money. Right now, however, we’re not making any money from this racket, as we don’t have a distillery to provide the booze – remember, this is prohibition, so we have to make or source alcohol ourselves. As a first step we can set up a distillery at our headquarters, which also contains an armory for kitting out our crew, an office from which to conduct diplomacy, and plenty of spare rooms for illegal operations like making moonshine.

Refreshingly, making booze isn’t a simple case of supply and demand in Empire of Sin, and you can choose to flood your speakeasies with a variety of different spirits, each with its own quirks and uses. You can rush out a batch of cheap swill if you only need to keep things running for a bit, or you can craft premium spirits that will bring in wealthy customers for a short-term cash injection. If you’re mean-spirited – which you should be if you’re playing as Scarface – then you can also produce poisoned alcohol, which you can trade to other factions in order to sabotage their own rackets. 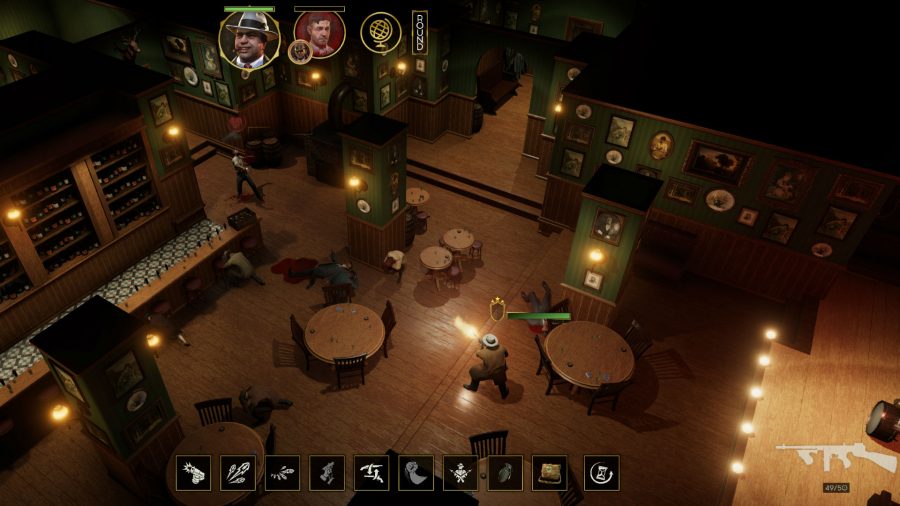 Alcohol and money are the two most valuable resources in Empire of Sin, and as a result, liquor is a crucial part of the game’s trading and diplomacy system. If you produce a lot of booze you can trade the excess to other factions in exchange for not just money, but also powerful weapons and abilities. If you’re short, you can buy your alcohol from the black market or try and smuggle some Canadian whiskey in from over the border. However, we’re told that both options will come with plenty of risks – the black market exposes you to sabotage by your rivals, for instance.

Losing your headquarters means game over, and the same is true if your chosen mob boss dies, which prompts us to hire some soldiers. Fortunately, our actions at the speakeasy have caught the attention of two recruitable characters, Bruno and Maria. There’s a hierarchy in your crew, with your character at the pinnacle and plenty of positions to fill beneath, including underbosses and basic soldiers. Picking an underboss is not a simple decision, as the appointment will open up new abilities, traits, and potentially upset the rest of your crew depending on who you favour for the job. We pick Maria, which unlocks the Bodyguard trait, allowing her to always make the first move in combat. She also has Hair Trigger, which grants a free action when downed. The problem is she’s also Short-Tempered, so that free action may be spent shooting one of her own squadmates. 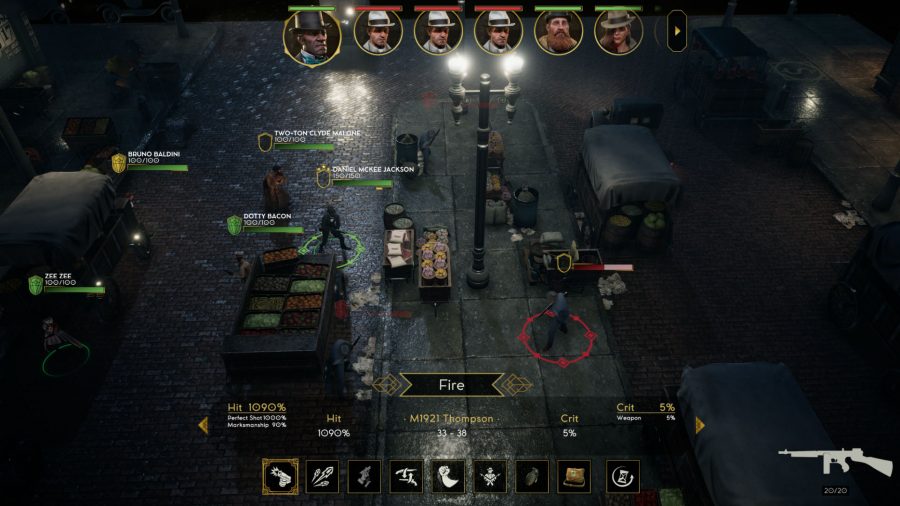 A deeper dive into Maria’s character sheet reveals a lot more variables at play, from primary and secondary weapons, item slots, utility slots, thrown weapon slots, an ability slot, relationships, and traits. The relationships feature is particularly interesting, although we don’t get to see its effects in the demo. Effectively, Maria has two friends and a lover, who we may stumble across at some point in a campaign, and depending on the scenario and the relationship, a huge number of outcomes are possible. We may find that Maria’s lover is fighting for the enemy and that she turns on us mid-battle, or that the pair abandon the fight altogether. It’s also possible that Maria’s lover will cheat on her, that Maria will discover this, and that she will kill them, which is a very bad outcome if they’re on our crew. With a roster of 60 ‘RPCs’ (recruitable player characters) in the game, you can expect these relationships to get very messy.

The demo ends with a shootout between our posse of three and Ronnie O’Neill in a discreet alleyway, in which our entire team is wiped out. Unlike XCOM, we won’t be whisked back to some strategy section and given a squad of fresh-faced mobsters with which to continue our bid for victory – this really is game over, within 20 minutes of starting a new empire.

More thinking and plotting: Here are the best strategy games

The sheer density of variables and mechanics in Empire of Sin has certainly captured my imagination, and I’m excited to see all these systems colliding with each other out in the wild. But what impresses the most is just how thoroughly detailed this strategy sandbox is, from the turn-based tactical combat that’s complex enough to invite comparisons with XCOM, to its diplomatic and interpersonal squabbles that call to mind grander strategy games like Civilization and Crusader Kings. If anything is going to disassociate the Romero name from the FPS genre in your mind, then Empire of Sin is probably it.