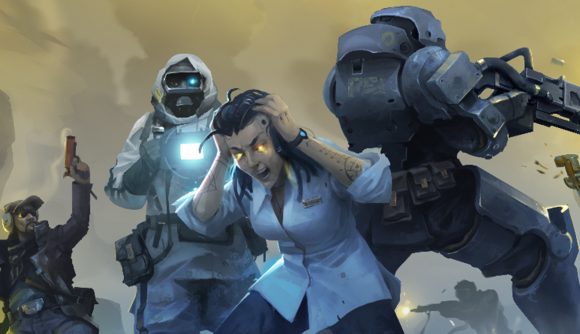 A bunch of RPG veterans – including some of the folks brought both Divinity: Original Sin games to life – are making “the Fallout of our dreams.” That game is Encased, an isometric turn-based RPG inspired by the classic post-apocalyptic adventures of years past. The project’s been in development for some time, but now the team has taken the game to Kickstarter for another round of funding to bring the title to life.

Encased puts you in an alt-history version of the 1970s, sent to explore the Dome – a massive structure that seems to have been left behind by an ancient civilization. You’re an agent of a multinational organization called CRONUS, seeking out the secrets that the structure holds.

Though it’s not quite a post-apocalyptic story, the Fallout inspiration is clear in every image, from the design of the conversation menus to the isometric, grid-based combat that makes use of both turns and action points. You control a single character, and although you make a class-style choice at the start of the game, you’re free to distribute skill points and abilities how you want throughout to evolve your avatar.

You can see all the details broken down in the trailer below.

Encased is scheduled to hit Steam Early Access in the first part of 2019. The aim of the Kickstarter is largely to expand the scope of the game – the team plans for a 30 hour campaign, a half-dozen factions to engage with, and hundreds of NPCs and locations to encounter.

We’ll see how it all pans out in the end, but Encased does have the blessing of founder Swen Vincke and the team at Larian. The folks at developer Dark Crystal Games have some impressive pedigrees – our list of the best RPGs on PC includes Divinity: Original Sin 2, of course – and Encased could be one to watch.