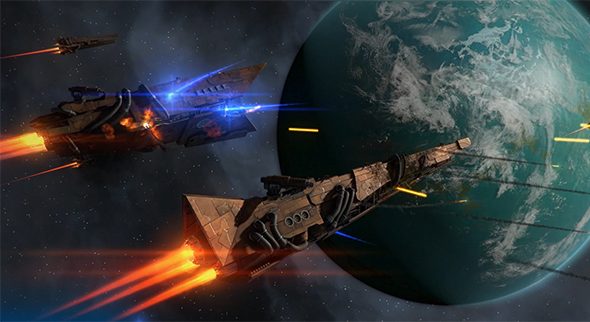 For a developer obsessed with games that have ‘Endless’ in the title, it’s slightly ironic that the forthcoming Endless Space 2 is actually Amplitude Studios’ first bona fide sequel. Oh, how we chuckled at that one. Yes, it’s been a long day.

If Endless Space 2 is up your street, check out our run down of the best strategy games on PC.

Either way, the follow up to the original space empire builder – which lauched way back in 2012 and was described by our very own bearded Ben as “flawed but excellent” – is fast heading for release, with the developer lifting the lid on a run on Steam’s Early Access this September.

In celebration, Amplitude has also unveiled the game’s third faction, called Lumeris. The studio claims it’s a “society that revolves around trade, economic deals, economic growth, and successful business.” Indeed, the developer claims this amphibious race is “prepared to make money in any environment”. It sounds a little like the kind of bluff and bluster new contestants on The Apprentice come out with, but we’ll roll with it for now.

“Their society is organized around a series of families that have traditionally run different parts of their economy, and the balance of power and negotiations between the families is what drives progress – or blocks it,” Amplitude concludes.

The latest trailer shines yet more light on the Lumeris, with the Early Access version of the game set to offer four of the final eight factions planned for full release. You’ll be able to get your hands on it next month, with a release date for the full game currently under wraps.