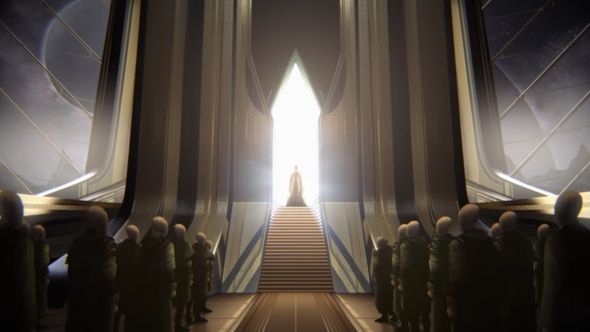 Update January 26, 2017: The egg-headed Horatio clones have finally arrived in Endless Space 2, adding a unique new faction that can assimilate the DNA of other races.

Every enemy is a potential way to improve your own race when playing as this faction of clones. To balance this powerful ability, food output drops with each assimilation, forcing Horatio players to choose their genes carefully.

Endless Space’s fantasy spin-off, Endless Legend, made our list of the best strategy games on PC.

The Horatio also boast visually stunning spacecraft that are more versatile than the norm, though the trade-off is that they house fewer slots.

Check out the full details in this new trailer:

As for general improvements, there’s a new orbital scan view, and overhauled technology tree, an improved battle system, and population and senate improvements.

Original Story January 20, 2017: The Horatio, a faction comprised entirely of clones of the most narcissistic man in the universe, are coming to Amplitude’s sci-fi 4X sequel Endless Space 2.

Returning from the original Endless Space, the Horatio were created when a very rich, very unstable, very bored man had the idea to fill the galaxy with copies of the brightest and most beautiful creature ever to exist: himself.

The Horatio can assimilate other factions’ population and get a +2 Approval bonus, enabling them to better sustain large numbers than anyone else. As in the first game, they look set to be the ultimate expansionists. For more, check out their wiki page, but if you’ve enjoyed checking out the factions’ ship models there (as I have), Horatio’s haven’t been uploaded yet.

The Horatio will be added as part of Endless Space 2’s second major update, which also adds new minor factions, an overhauled tech tree based on player feedback, new victory conditions and more. It will go live on Steam next week.

Amplitude made the announcement yesterday on Endless Day, their annual celebration of all things Endless (whether spatial, legendary, dungeonesque or otherwise).

“Endless Day has become one of our favorite days of the year as we get to celebrate the anniversary of our studio with our community and fans,” says Romain de Waubert de Genlis, Amplitude’s creative director. “We are looking forward to a great 2017, and can’t wait to reveal even more information on Endless Space 2 soon!”