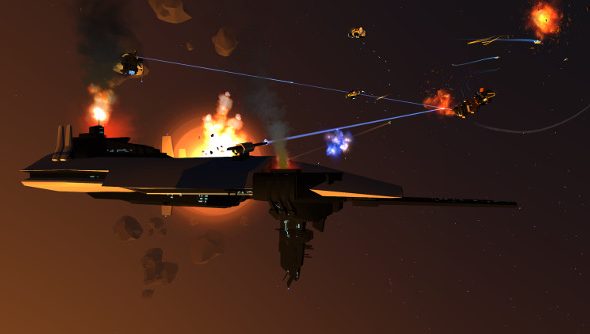 The Indie Megabooth is increasingly the star attraction of PAX. While the lines for games like Evolve and The Evil Within were hours-long at PAX East, the Megabooth was frequently “walk up and play” for some of the coolest, most exciting games around. Sometimes you’ll stumble across something that just stops you dead in your tracks.

That’s how I felt when I saw people playing Enemy Starfighter. On a split-screen demo monitor showing the view from inside the an Oculus, I spotted what looked an awful lot like Homeworld. Except someone was piloting a fighter, engaging in twisting dogfights that were straight out of TIE Fighter. It was like someone had turned my daydreams circa 1999 into a space sim.

I dropped what I was doing and went over to talk to developer Mike Tipul.

Tipul is a former Bungie developer who joined the studio in part because he admired the Myth series so much. Unfortunately, he spent his Bungie career as a part of the Halo assembly line, working on blockbuster shooters, but never the kinds of PC experiences that had resonated so deeply with him.

Now independent, he started work on Enemy Starfighter right as the Oculus Rift Kickstarter got under way. He’d been following news of the device ever since John Carmack started evangelizing for it. While he wasn’t sure how things would work out with the Oculus, he knew the device had huge potential to revitalize the space shooter genre.

“The Oculus is hard to develop for in some ways, but it makes some things so much easier.,” Tipul said. “Like, knowing where you’re taking fire. That’s a problem where, in a 3D space with a traditional display, you don’t have a lot of good options. We usually try to solve it by spraying the red mist in from the direction where you’re getting shot, but that only sort of works. With the Oculus, that problem goes away. The player can just turn and look.”

Superficially, then, Enemy Starfighter bears a resemblance to EVE: Valkyrie. Both drop you into a starfighter cockpit and let the Oculus do the heavy lifting of orienting you to the action. But where Valkyrie is very much a multiplayer dogfighting game, Enemy Starfighter more mission-oriented, in the vein of TIE Fighter or Freespace.

It’s evident just from the avionics aboard your spacecraft. Turn your head to the right and you see a list of ships in your fleet projected onto the cockpit canopy, along with their current status. Look down, and you have a gun-camera display that lets you see what your current target is up to long before you enter visual range.

Nor does it stop there. While I didn’t get a chance to see it, there is a Flotilla-style command interface that will let you direct allied ships in combat. The demo focused exclusively on the dogfighting, but Enemy Starfighter’s campaign structure makes it sounds like the tactical angle may wind up being important.

“At the start of the game, you pick your House and that determines your fleet. And you are carrying those guys through to the end of the game, where the goal is to nuke the enemy homeworld,” Tipul said. “ And they will level up, and they will be there at every jump as you go. So you will always have your starting fleet with you. And you can rename them; that’s a fun little thing I’ve picked up from games like Myth and X-COM.”

It all sounds a bit like Ender’s Game, although in this game you’re playing as someone who is not even arguably a good guy. 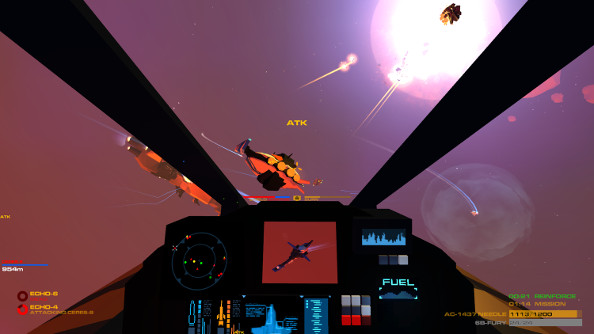 “I don’t know if you noticed, but as you’re flying and taking out ships, they all launch escape pods,” Tipul said. “And you have a gunner on your back who is taking out all the escape pods as you go. And that’s how you earn Dread for the Empire.”

Dread is the equivalent of XP, and it’s how Enemy Starfighter sidles up to its other major design inspiration: Diablo. As you go through the campaign racking up dread, you can spend it on upgrades for your fleet or, presumably, upgrades to your own fighter. Although every upgrade comes with a cost.

“I want all my upgrade choices to have an upside and a downside, like the Fallout perks,” he said. “I love that system.”

I’m still not sold on the idea of flying around as a space war-criminal, but as Tipul pointed out, the entire game is abstracted to the point of bloodlessness. It’s partly an homage to games like Homeworld and Flotilla, whose art styles were so stylishly minimalist and abstract. It’s also a blunt concession to reality: Tipul’s Marauder Interactive is practically a one-man show, and he can’t afford to spend a lot of time on graphics.

Enemy Starfighter makes the most of what it has, however. I’m enough of a Homeworld fanboy that the art style never struck me as a limitation so much as a great aesthetic choice. In a twisting and turning dogfight, the simpler polygonal spacecraft and flattened textures evoked TIE Fighter CD’s Gouraud-shaded warships.

While the enemies weren’t putting up much of a fight during my demo, I like how Enemy Starfighter is about situating yourself within a larger battlefield. Hostile fighters try to protect their capital ships while friendly spacecraft go on attack mission of their own, and objectives can change on the fly as more ships enter and leave the battle.

Situational awareness is key here, and here’s another area where Enemy Starfighter excels. Every single piece of information I was given during the game came from some diegetic source. My ship’s onboard displays carried all the info I needed about my own ship and allies, while the reports on the broader state of the battle came from the constant dry, detached murmur of radio system. Everything important was contained within the fiction of the game. 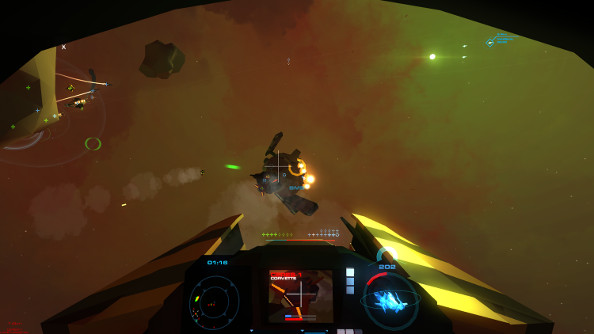 “I want to give you as much information as possible and make it feel like a real modern fighter jet,” Tipul said. He wants players to be able to glean the entire story of a battle just from keeping an ear cocked for important radio messages.

“Homeworld used radio chatter, but we’re taking it to the next level. Maybe too much,” he admitted. “But giving players information about the state of the battle is super important. If you can’t look at the battlefield overview, you still know when you’re going to lose a capital ship. You know when cruisers are launching fighters. You know everything that’s going on just by listening.”

It also gives Starfighter the same feeling of eerie, cold detachment that marked Homeworld or the gunship mission in Modern Warfare. All hell is breaking loose outside your cockpit canopy, with starships twisting in their death throes while fresh wings of fighters streak through criss-crossing laser fire. But the voices coming through your headphones are all curt, calm, and as dry as the desert air.

Tipul know there’s a lot left to be done on the game, especially to create the kind of campaign experience he wants. But he still hopes he can bring Enemy Starfighter to the public before too long.

“I think I’m going to do Early Access sometime this summer. But i want to make it a good Early Access experience, and if I can’t do that, then I won’t put it out. I want people to feel like, ‘I bought this, I played it, and if I never touch it again, I feel like I got my money’s worth.’”