Enforcer: Police Crime Action puts you behind the badge of a Mountain Valley Police Officer. It’s your duty to keep the peace, be that by setting up roadblocks to check for drunk drivers, ticketing illegally parked cars, or hunting down escaped murderers in the woods.

Too few games let you play as the police and, when they do, it’s often as an undercover cop so you end up committing crimes anyway. Enforcer’s not like that. It’s an authentic police simulator and it allows for a lot more fun than you’d expect.

I just wasn’t expecting people to fly into the air when I tased them.

Enforcer is Odin Games’ first PC game but it’s published by Excalibur, the team behind the bulk of oddly niche sim games. Airport Firefighter Simulator, Street Cleaning Simulator, and Chemical Spillage Simulator are all available in their back catalogue. Enforcer looks a lot like those games, but it’s got a little more going on under the hood.

Odin Games have made an open world for you to patrol freely. You’ll have reports of crimes in progress come in over dispatch. These are randomly generated and could be anything from an assault, to a kidnapping, to a drunk insulting people on the high street. Depending on the crime you may need to interview witnesses, search for suspects, and gather evidence to find the perpetrator. As you progress more types of crime are added to the pool leading to greater variety of missions coming over dispatch.

You start life in Enforcer as a simple trooper. You’ve your gun by your side, your squad car in the driveway, and a career ladder to climb. You’re awarded career points for each good cop move and you lose points for each bad one. Write a ticket for an illegally parked car, gain 30 points. Point your gun at an innocent, lose 50 points. Tase a witness, lose 50 points. Shoot someone having a cardiac arrest, lose 500 points. (It took me a little while to get into the mindset of being a public servant.)

Good deeds see you promoted and promotions open up new missions and abilities. At rank 3, senior trooper, you can start customising your squad car, changing up the colour scheme and trying out different lighting setups. Each new rank adds new crimes to the mission pool.

There’s no room for loose cannons in the MVPD. Before you kick in the door of a meth cook’s home you’ll need to apply for a warrant at the police station and make sure to act on it before the warrant expires.

You need to respond without using excessive force, too. Pull your gun on a drunk and you’ll receive a penalty but if someone pulls a gun on you you’re within your rights to chase them through the streets shooting at them with an MP5. 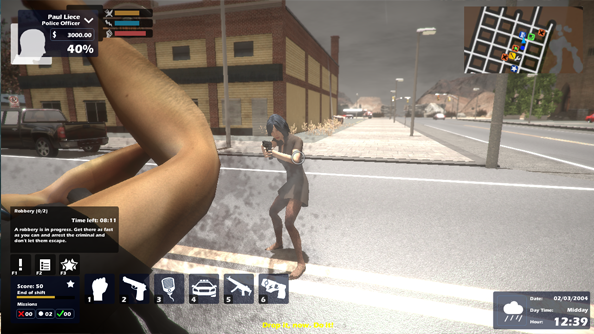 While you’ll get reports of murders and assaults coming over the radio, the bulk of your time will be doing the more everyday tasks of a police officer – ticketing cars for parking violations or speeding, breathalysing motorists, and frisking black people. You need to complete these tasks as much as the big cases because any failed job loses you career points. Lose too many and you’ll be fired.

If you want to level up faster you can try out the realistic mode. It allows you to investigate three crimes simultaneously and get the rewards that come with them. However, you might be searching the woods for a killer when you receive word that someone’s spotted the kidnapper in town and, as each one comes with its own countdown varying from 10 to 45 minutes, sometimes you’ll have to drop one case in favour of a more pressing one.

Realistic mode comes with one other caveat: permadeath. In normal mode. a bullet to the head sends you to the hospital. In realistic you’ll have to start again from the bottom rung of the career ladder. That added pressure might make you a little more trigger happy when it comes to apprehending suspects.

There’s another way to level up quickly, though, and it requires you to go a little mad with power.

At any time you can pull a car over and check it for problems, things like out of date licenses and broken brake lights. If you find a fault you can ticket the driver and have a tow truck take away the vehicle. Or, you can do what I do, set up a roadblock, order everyone out of their cars, and order in a tow truck to take every car away, regardless of whether is has a mechanical fault. The game doesn’t check whether it’s a legal tow, netting you lots of lovely, lovely points. 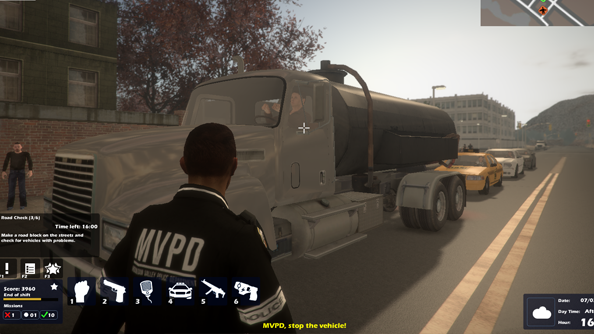 Don’t become married to the job

You might think being a cop in a small town would be an easy job but Mountain Valley’s going through something of a crime wave. Every other driver I breathalyse is a drunk, every criminal carries a gun – including the minor crimes like vandalism and being drunk and disorderly. It’s easy for the stress to start getting to you.

If you stay on shift too long your stress levels will go up and your wakefulness will go down, reducing your aim, which can lead to accidents. To get your character’s head back in the game, you need to make use of your off shift time by visiting family, napping on the sofa, and sneaking Ketamine out of the drug lockup having a shower.

You can use the cash you earn on shift to buy nicer furniture for your house, invest in a car, or head into town and buy food from the stalls and restaurants. Though, in my experience, all food, everywhere in Enforcer is $6 and you can eat it all day without any negative effects.

As the year goes by different city events will take place which you can attend. While these can be relaxing at any time you might see someone being robbed or who’s had a little too much to drink. In which case you need to make a citizen’s arrest. Good thing you’re always carrying your gun.

It’s going to get better with age

While Enforcer’s been released its success has surprised Excalibur and they’ve decided to “add features post launch”. A lot of the suggestions are coming from the community but the big one that developer Odin Games want to add is a multiplayer mode.

Right now the focus is on bug fixing because Enforcer does have some delightful ones. I’ve seen cars floating 100ft above the ground, vehicles spawned inside one another bouncing down the street, and whenever I tase someone they rotate on the spot and float into the air (I hope they leave that one in). 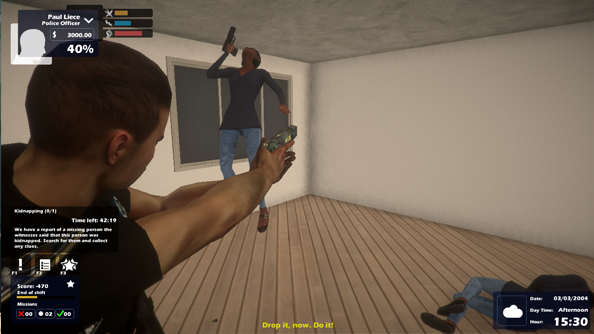 Enforcer: Police Crime Action may be a little shonky around the edges but it’s offering something too few games do: putting you in the shoes of the police and asking that you abide by the laws you uphold.