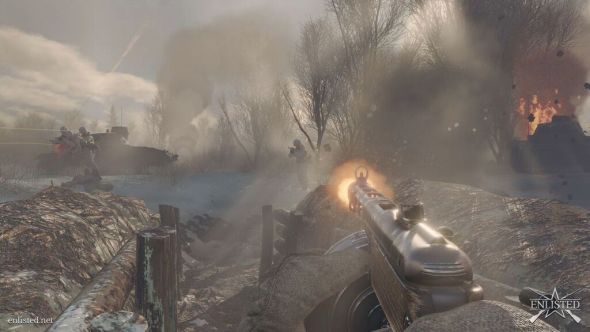 Gaijin Entertainment, the folks who brought you War Thunder, have announced their latest project. Enlisted will be a large-scale, squad-based multiplayer FPS, and it will explore the most important battles in World War II.

Have a hankering for the classics? Here are the best WW2 games on PC.

Developed by Latvian newcomers Darkflow Software and published by Gaijin, Enlisted will initially offer two campaigns, each focusing on a different front in the latter stages of WW2: the Battle of Moscow and the Battle of Normandy. It will be built in Gaijin’s proprietary Dagor Engine, and early screens look rather impressive.

What’s unique about the game, though, is Darkflow’s promise to consult the fans for its future development.

“Enlisted is an ambitious undertaking, unlike any game we have ever created. It will be a first person shooter decided by the fans, for the fans,” says Alexander Nagorny, a Darkflow producer. “They will have direct input into what we create, including things like campaigns, game modes, even which platforms after PC we will support.”

The Enlisted websitehas details on how this will work. Darkflow are crowdfunding right now, with $250,000 unlocking a third campaign set in Tunisia and featuring General Rommel. At $500,000, however, a fourth campaign “by the players’ choice” is unlocked. At $750,000, a “game module”, also determined by players, is unlocked. (It’s not clear what exactly a game module is.)

You can pledge to Enlisted by buying either or both of the first two campaigns, as well as weapon packs which unlock guns at different tiers – hopefully this doesn’t mean it’s pay-to-win. The biggest pack, available for $50 USD, includes both campaigns, three guns, and grants early access to the game. Perhaps this will take the form of guaranteed access to Enlisted’s closed beta, which is planned for the second half of next year.

More details are available at that website, which also includes an FAQ discussing the game’s goals and possible future features. For example, the team’s dedication to historical accuracy means vehicles will be present, “but player control of the vehicles is not planned at this moment. We will think about adding such an option if we have enough resources and the community is interested.”

Many developers promise a community-centric approach to making games, but this is bigger talk of that kind than we usually tend to hear.