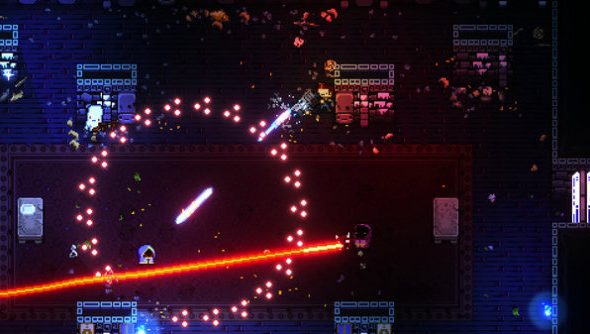 Enter the Gungeon is a hyper-speed, bullet-filled, roguelike dungeon crawler filled with guns – lots and lots of weird and varied guns. In fact, your ultimate goal in its mapcap world is to find a legendary treasure: a gun that can kill the past. It’s out on April 5, which is the future.

April is a whole month away, so why not get your pixel fix in our list of PC’s best indie games.

It’s a quirky bullet hell game and will probably require better reflexes than a cat raised on Red Bull and amphetamines. It’s trailer is complete madness, showing off some shooting and rolling, rolling and shooting, a bit more shooting and a trip to the shop to stock up on more guns, for shooting.

As Devolver Digital’s CFO Fork Parker puts it: “Enter the Gungeon dares to dream about what would happen if you shot bullets at bullets that were shooting bullets back at you. Gun on gun crime is a real issue and I’m going to exploit it for money.”

Have a watch of the trailer. And yes, that is a gun that lets you fire rainbows at the end.