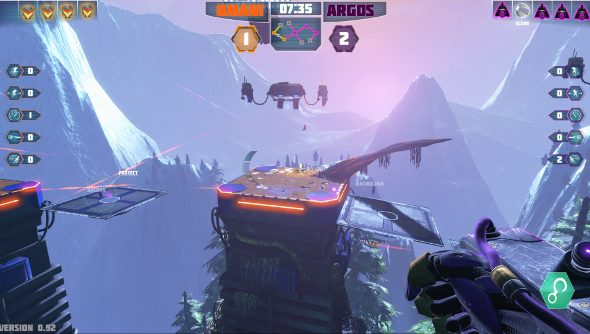 You can get a taste of future sports today, because FPS ball game Epigenesis is launching. It’s all leaping and shooting and cool costumes, and we should probably all just play that instead of watching men in wee shorts kicking a ball.

While most sporty tournaments are of no importance beyond who gets to hold a gaudy trophy, Epigenesis determines the fate of the world. The planet’s a right mess, and the competition is essentially a fight for global domination. Serious stuff, then.

Matt posted his Epigenesis Early Access review last year, and found himself becoming a fan. His only concern was that there just weren’t enough players at the time. “For an alpha Epigenesis is extremely accomplished, with few bugs and no major issues. But for all the fun I’ve had with this insane sport, that fun has been rare. There’s a simple problem: no one is playing it. For days I’ve been logging on, only to find all the servers maked 0/10 players. My first match was 1 v 1, and whilst incredibly tense, was not Epigenesis as intended. I’ve never managed to play in a full server.”

With it about to hit launched status, here’s hoping there are enough players fighting for world domination.

Epigenesis is normally £6.99/$9.99, but there will be a 15 percent launch discount. Sports don’t always need to be pricey, it seems.