EPOS was always going to have the monumental task of proving itself after its split from Sennheiser, but the EPOS H3 headset’s superb microphone proved the brand had the audio chops to hold its own with in-house products. Continuing its winning streak is the EPOS B20: its first dedicated plug-and-play USB microphone that puts up a fight against competition from Blue, Razer, and Elgato – provided you’re willing to pay the premium price.

It has the look and build quality you’d expect from a mic this expensive, with a sleek all-black aluminium design and a ringed stand that doesn’t wobble when placed on the best gaming desk. It’s not as flashy as the Razer Seiren Emote or the HyperX QuadCast S, but its understated appearance helps keep all eyes on you.

There are built-in controls for muting, adjusting system volume and gain, and switching between pickup patterns. The small LED would be helpful turning from white to red when you’re muted, but it’s pretty hard to see in anything other than a dark room. On the bottom, you’ll find the USB Type-C connection, and a 3.5mm audio jack to let you monitor your microphone using a compatible wired gaming headset. 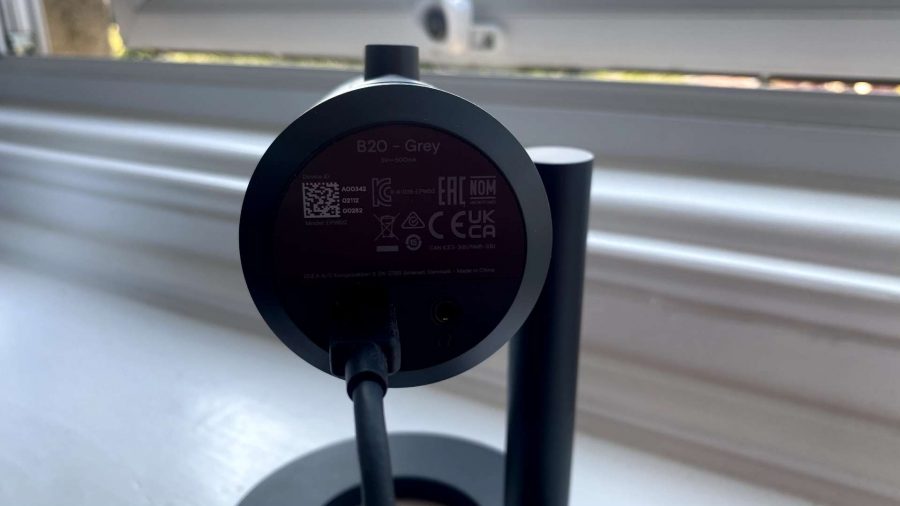 It comes with a distinctive ringed desk stand, which keeps the B20 from wobbling. Since it attaches via a standard ⅜ thread, you can also easily hook the mic up to a boom arm for better sound quality. I can’t recommend this enough, especially as EPOS suggests using the microphone around 15-20cm from your mouth.

While you can place it in front of the best gaming keyboard, it’s tall structure can get in the way of the best gaming monitor, limiting where you can position it. On top of that, the lack of a built-in shock mount means keyboard presses turn into booming clacks, which is especially disruptive when using the desktop stand but quietens down to a more manageable level when you suspend the microphone on a boom arm.

There are four switchable patterns to choose from on this condenser microphone, including cardioid, bidirectional, omnidirectional, and stereo pickup, helping to make it a versatile piece of kit whether you’re using it alone or recording a podcast. 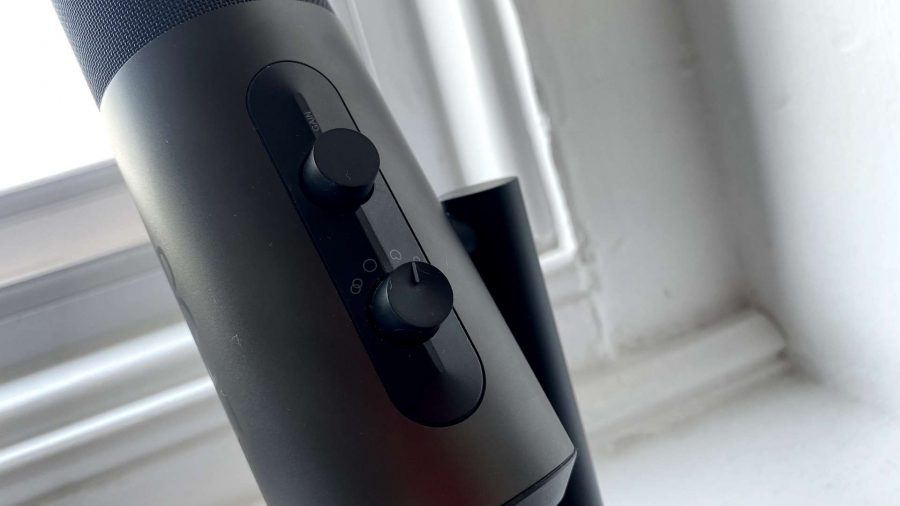 The B20 captures your voice with a crystal clarity that’s similar to other high end microphones, and strikes a balance of tones that’s instantly noticeable when moving from a headset mic.

It sounds impressive out of the box when using it at the recommended distance, and the default profile is clean enough for me, but EPOS gives you the tools to tinker with if you want more out of your microphone. The EPOS Gaming Suite is easy to navigate with ‘warm’ and ‘clear’ voice presets, but also lets you dive into the frequencies so you can fine-tune equalisers to your liking. 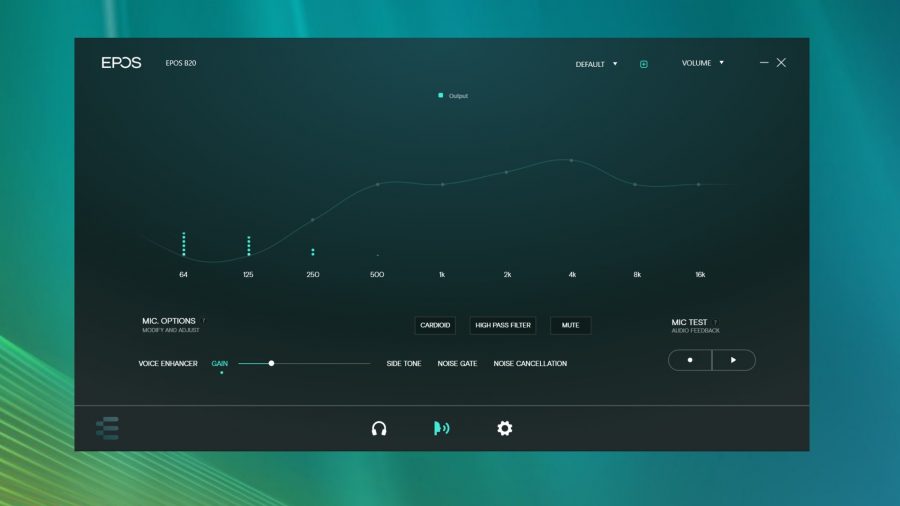 While you can adjust gain on-the-fly with the built-in dial, you have more granular control through the software as there’s a numerical confirmation of where it’s set. You can also adjust the level of sidetone, giving you real-time playback of what your microphone sounds like.

There’s also an adjustable noise gate, a two-stage noise cancellation feature, and the option to record audio snippets and play them back as you tweak the mic. The ability to save and name your settings as presets is handy, too, letting you easily swap between settings as you switch recording scenarios.

Since bidirectional and omnidirectional patterns pick up sound from behind the mic, I stuck with cardioid to reduce the noise of my mechanical keyboard, but the B20 struggles with this in the same way most desktop microphones do. Each click is still prominent with the gain turned all the way down, and this says nothing for just how loud it’ll be for clicky keyboards, as I use linear switches. Similarly, it doesn’t play nicely when using external speakers, as many of my colleagues noticed their voices feeding back during calls. 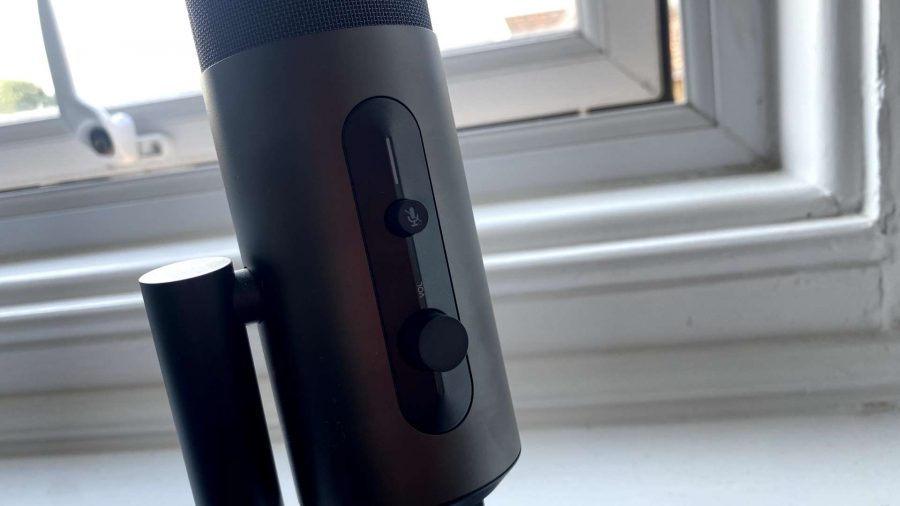 The optional built-in noise cancellation goes some way to reduce background noise, although at the expense of audio quality, introducing a slight robotic sound. Removing background sounds naturally, such as wearing a headset, is the best way to improve quality, although it’ll be a compromise for some. If you have a compatible Nvidia GPU, you might fare better using RTX Voice or Nvidia Broadcast to remove those disturbances.

The EPOS B20 is a solid entry for the brand’s first plug-and-play USB microphone, with crystal clear sound quality, a sleek design, and intuitive software, even if it struggles a little with noise cancellation.

It has all the hallmarks of the best gaming microphone, but currently sits at a higher price tag than similarly-performing rivals like the $169 Blue Yeti X without offering any distinctive features to tip the scales in its favour. It’s one to watch if prices change or it goes on sale, but there are other options out there that might be better suited in the meantime.

EPOS's first microphone looks and sounds as good as the rest in a perfect setup, but it struggles when you bring background noises into the mix. It's priced a little more than many other high-end USB models, but doesn't have any extra features to justify the higher price tag, so it's worth keeping eye out for a sale.