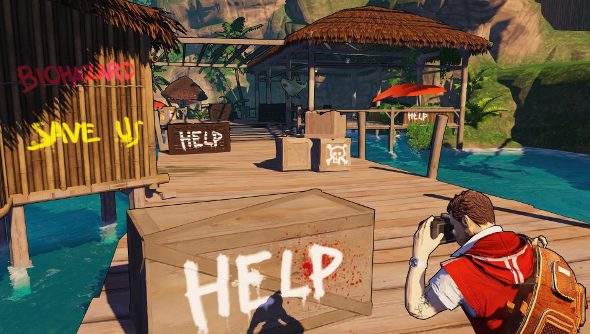 The odds of Dead Island spawning an expansion, sequel, MOBA and third-person “survival mystery” thingamabob were no doubt slim. But here we are. The latter of the group, Escape Dead Island stars a chap called Cliff Calo, which immediately puts ahead of the pack. And it’s due out in the not too distant future: November 18th in North America and 21st for the rest of the world.

Slap your eyes on a new, completely disorientating trailer, below.

“This is my story,” Cliff informs us. His. Nobody else can claim this story. It’s the story of a man, who is presumably some sort of journalist man, who has gone on a working holiday to beautiful Banoi. But then! Zombies! Cliff is also haunted by the past, which you’d expect to take a back seat to all the zombies that are trying to eat him.

Dead Island’s brand of slapstick violence seems a perfect fit for the comic, cel-shaded look Escape’s going for. And it looks like it’s going to be a bit flashier, but that might just be the strobe-like trailer.

I am not at all convinced that the “mystery” of Dead Island, a series dedicated to hacking off zombie limbs, is really worth exploring, but – and it’s a big but – if the combat is as entertaining as the original’s, I’m more than willing to go along for the ride.