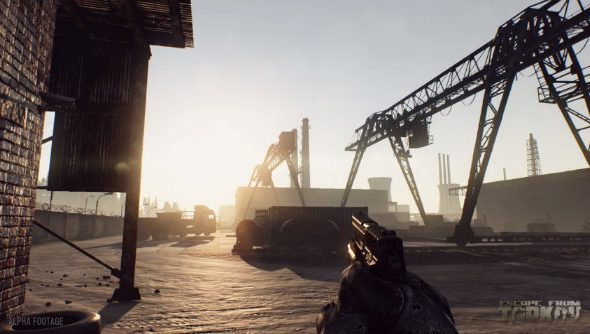 When is a trailer not a trailer? When it’s longer than your average episode of a soap opera, perhaps? Nevertheless, the folks behind Escape from Tarkov have decided to couple news of it’s closed alpha with the release of a 28 minute gameplay video, open to all.

Want something awesome to play? Have a look at the best PC games here.

Escape from Tarkov, which has been on our radar for some time now, is part shooter, part MMO, part RPG, and developer Battlestate Games has chosen today to announce that gamers signed up for its alpha test should “keep a close watch on their inboxes for an invite”, with battle set to commense on August 4.

The developer claims only a “select group” of alpha sign ups will gain access to the game, though for those who don’t, the aforementioned video showcasing “battlegrounds, weapons and combat” should go some way to satisfying their thirst for action. If you’re still interested in sampling the game first hand, you can still sign up for the alpha here.

Back at GDC we were fortunate enough to glimpse some gameplay from what was then the latest build of Escape from Karkov, with the wondrous Ben Barrett claiming it was “incredible to see a game that looks this good in motion with such massively open areas at a decent framerate, before punching the air. Presumably.

Take a look at the latest video and let us know your thoughts in the comment section below.