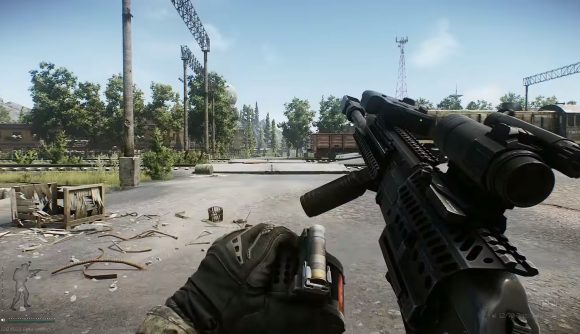 It’s always interesting when a darkhorse of some kind rises above the rest to become, even if briefly, the most-watched game on Twitch. Right now, that’s happening with survival shooter Escape from Tarkov, a hardcore early-access FPS from Russian developer Battlestate Games.

Escape from Tarkov had about 124,000 total viewers at the time of this writing, with a plurality of those watching popular Australian streamer Pestily, who had almost 45,000 viewers watching his Tarkov stream Monday. As the day began in the US, more streamers joined in, including CohhCarnage, Smoke, and Sacriel.

For at least part of Monday, Tarkov was pulling in more viewers than League of Legends and Fortnite. Only the ‘Just Chatting’ category had more viewers, with 140,000.

Part of the viewership spike is thanks to a limited-time promotion Battlestate Games is currently running with Twitch, which awards viewers with unique in-game loot drops if they watch certain Tarkov streamers. Loot includes special weapon variants, optics, tools, and keys to use to open certain doors squirrelled away in Tarkov’s various raid maps.

If you’re unfamiliar with Escape from Tarkov, it’s a unique multiplayer shooter that blends survival elements, persistent gear, and PvE elements. As a PMC, you head into ‘raid’ instances around the city of Tarkov, hoping to gather gear from the environment and downed enemies before extracting to safety.

If you die, you’ll drop all your gear, which you’ll have to replace either by shopping at various merchants, or by replacing it with gear carried by other players and NPCs you defeat.

Ironically, the chart-topping viewer count for Escape from Tarkov came just as Battlestate Games had its own Twitch channel banned: according to Reddit, during a stream a Battlestate developer displayed a realistic (although unloaded) pistol and pulled the trigger while aiming it at himself. The ban is said to be temporary.