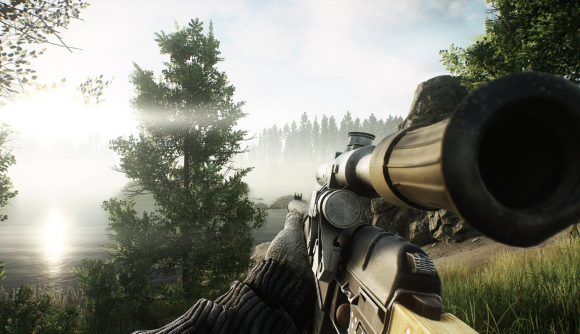 When Battlestate Games ran its last Twitch drop campaign for its survival shooter Escape from Tarkov, the game rocketed to the top of the Twitch charts. Players swarmed to channels broadcasting Escape from Tarkov in the hopes of receiving valuable gear, and it briefly made Tarkov the most-watched game on Twitch. Now, Battlestate Games is running a second Twitch drops campaign, but the rewards may be a bit less enticing this time around.

By and large, the campaign still works the same way it did the first time around: you link your Battlestate Games profile with your Twitch profile, and then go find Tarkov streamers whose channels are marked with ‘Drops Enabled.’ Then you wait as that sweet, sweet loot rolls in – you’ll pick it up as a delivery the next time you log into the game.

But thanks to changes to how Tarkov’s economy works, those rewards won’t be quite as valuable this time around. In the last big Tarkov patch, which wiped all character progression for all players, a mechanic called ‘found in raid’ was introduced. Now, in order to sell items on the in-game Tarkov flea market, it has to have ‘found in raid’ status. Basically that means you have to have found it while playing and successfully extracted with the item – and there are lots of ways for items to lose this status.

That update has proven to have major implications for Tarkov’s economy. It helps stymie rich players who want to buy up everything the NPCs have on offer and then sell the goods at a markup on the flea market, which keeps bots and real-money traders from getting too far out of control. But it also means the gear you’ll get from Twitch drops won’t necessarily be as valuable.

Twitch Drops are back in #EscapefromTarkov Tarkov! Participation requirements for it are as easy as always, you will need to follow this simple instructionhttps://t.co/MP11iOwsZy pic.twitter.com/bVl7OtCTO2

Some of the gear items that dropped during Tarkov’s last Twitch campaign could be sold for substantial amounts of money, but this time, since the gear you get from drops won’t be marked ‘found in raid,’ you’ll have to make due with what the NPCs are willing to offer you, even if it’s a particularly rare piece of gear.

Of course, the other option is simply to use the gear during your next raid and not worry about how much it’s worth.

If you own a copy of Escape from Tarkov, you can head over to the Battlestate Games site to link your Twitch account and start earning drops. That happens to be the place to purchase early access to Tarkov, if you’re interested in jumping in. The campaign kicks off June 11 at 10:00 BST / 5:00 EDT / 2:00 PDT.