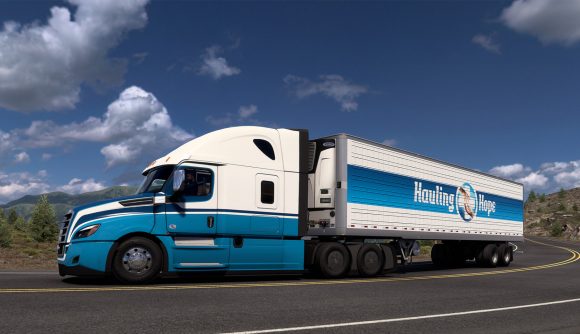 January 22, 2021 SCS Software says that its COVID-19 delivery event was prompted by a “civic duty to promote the notion that vaccines are our hope for the future.”

A new event is underway in both American Truck Simulator and Euro Truck Simulator 2 called Hauling Hope: a series of challenging missions in which you’ll attempt to safely deliver COVID-19 vaccines to various destinations. Despite an announcement broadly implying that these vaccines are a positive thing, developer SCS Software appeared to be strangely cordial toward anti-vax sentiments in its messaging, but the company now says it is “proud to stand behind sound policies and good research.”

“An accompanying press release that followed the initial announcement of the event carried an unfortunate rephrasing of the original message on our blog,” an SCS representative tells us via email. “This message may have given the wrong impression that we are denying responsibility by avoiding a clear stance on COVID vaccines. Our position is as such: we created this event to recognize the sacrifices of truckers and logistics staff in these difficult times. We are resolute in our belief that vaccines offer a glimmer of hope for normalcy once again, and we are proud to stand behind sound policies and good research.”

SCS says that it “felt a civic duty to promote the notion that vaccines are our hope for the future, but also wanted to minimize controversial imagery such as syringes.”

The studio’s first press release on the event said that “We do not take a stand neither for or against vaccines, we just wanted to express our appreciation and support for every real truck driver out there who have been facing very challenging times since the pandemic situation began!”

In a follow-up email, an SCS representative described this as an “error that happened due to a language and translation barrier, here in our office”. They add “The statement we tried to express in the previous press-release should have always been this: ‘No matter if you stand for vaccines or against them, these truckers still have to work really hard and we wanted to give them their well-deserved 15 minutes of fame.'”

Developer comments on the studio’s own announcement blog suggest that the event has proven pretty controversial among its own community – or, at least, has prompted plenty of online arguments, which appear to have now been (mercifully) moderated out of existence.

For more simulation games or truck games to enjoy in these trying times, you can follow those links. (Also: science is a good thing, my friends.)