SCS Software are working on update 1.23 for Euro Truck Simulator 2, and update 1.2 for its Yankee cousin, American Truck Simulator. The headline feature of these updates is Steam Workshop support for both games.

If you like pretending to do mundane stuff, have a look through our list of PC’s best simulation games.

Steam Workshop support is currently undergoing internal testing, but there are already mods being created, and SCS Software are “looking forward” to sharing the results in a beta once it’s ready for a wider look. 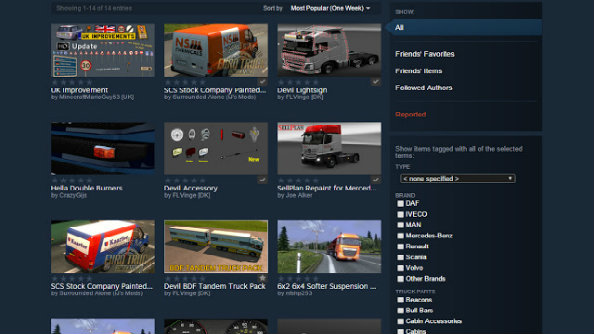 Personally, I prefer using the Steam Workshop for mods, because of its simplicity – you just tick a box and they’re downloaded and automatically updated.

If you’ve ever downloaded mods on Nexus and something’s gone wrong, you’ll know it can be more of a pain in the arse than a 12 hour drive through Europe – even with Nexus Mod Manager. There are no willies on Steam, mind. Swings and roundabouts, I suppose.

Call me lazy, but I like it when things just work. That’s why I could never be a modder.

If you are a modder, though, you’ll be able to use a free Steam app called the SCS Workshop Uploader and create some good trucking mods. The developer is also creating a Wiki resource where all the information will be available for you to pick through.

The beta should be ready in a “couple of weeks“.