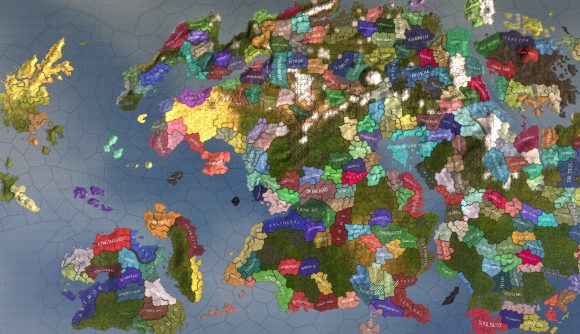 The EU4 mod scene is not always as dynamic and creative as other grand strategy games, but the community loves a good reskin as much as the next person. Elder Scrolls Universalis is a total conversion mod that brings the world of Elder Scrolls to Europa Universalis IV.

This mod is not set during the timeframe of the modern Elder Scrolls games, but instead goes back into the universe’s distant past, to a time known as the ‘First Era’. The mod offers content covering a 2,500 year timespan, the continent of Tamriel and other known landmasses from the world of Nirn, as well as plenty of familiar characters, cultures, and new mechanics.

The mod was originally released in 2019, but it’s still being worked on and updated, especially as new major features get added in through various EU4 DLC expansions. The most recent update – 2.0.6. – introduced a new political map for Yokuda and Pyandonea, two land masses that were mainly referenced in a paper booklet included in the special edition of The Elder Scrolls IV: Oblivion, called The Pocket Guide to the Empire, 3rd Edition.

A recent teaser for the mod posted on the r/paradoxplaza subreddit shows some of the work the team have done to overhaul the game’s ‘ages’ system to work with the Elder Scrolls setting. 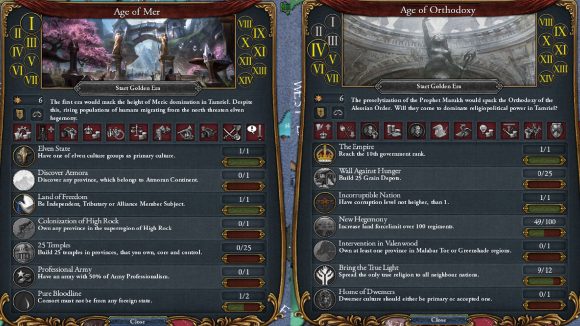 In EU4 the transition of time between key eras is handled through the ages interface. There are a number of achievements you can aim for that are themed around the common perception of the age. Triggering these achievements can net you specific bonuses, as well as earn you a currency that will let you purchase buffs for that age. Each age can also have special rules active that change the normal course of gameplay.

Buy now: It’s never too late to pick up EU4

For Elder Scrolls Universalis, the team’s aim is to provide content for 14 ages, which are to be spread across the game’s timeline for the ‘First Era’. This overhaul is due in a future update, although we hope it doesn’t come out too close to the next EU4 expansion because otherwise it’s just going to need updating again.