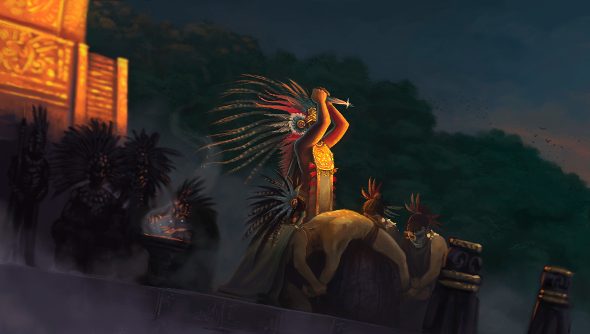 El Dorado is Europa Universalis IV’s fourth chunky bit of DLC, not including the countless unit and music packs. Conquistadors are sent off on massive expeditions into the unknown of the Americas, in search of treasure, but they’ll probably only find death. It sets sail from Plymouth, Lisbon, or whatever port you prefer, next week, on February 26th.

Last week, I got to faff around with all the new stuff for an hour, exploring the new world and making silly countries in the new nation editor. Now that I’ve liberated my notes from an Aztec temple, I can tell you what I made of my brief time with the expansion.

El Dorado has a bit of Crusader Kings II in it. Of all the differences between the two grand strategy games, the largest one is that EUIV is all about nations, while CKII is all about people. That’s why El Dorado seems a wee bit odd. It draws the focus away from great wars and managing the minutiae of empire building, instead of focusing on the plight of conquistadors, getting into adventures far from home. 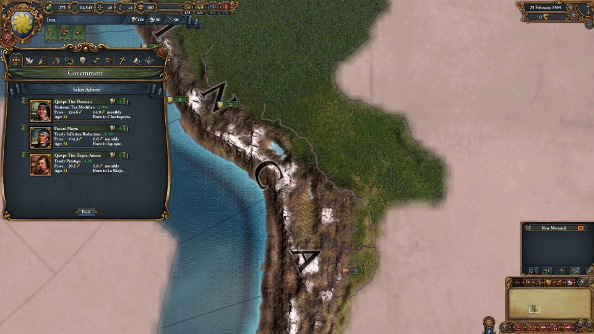 An hour, of which I only spent half of it on the hunt for gold and glory, isn’t really enough time to get to grips with the new stuff, and it didn’t help that I encountered a few problems.

The search for El Dorado is mostly a text adventure. You send a conquistador to the Americas, give him some troops, and then start the expedition. From there, he automatically explores not just South America, but both continents, seemingly at random. Peppering this very long walk are text pop ups that either get him closer to his goal, or set it back.

Some of the pop ups are merely AARs, telling you what happened without asking for any input, but occasionally one will appear that demands you make a decision, though the results appear to be based on luck or behind the scenes stuff. 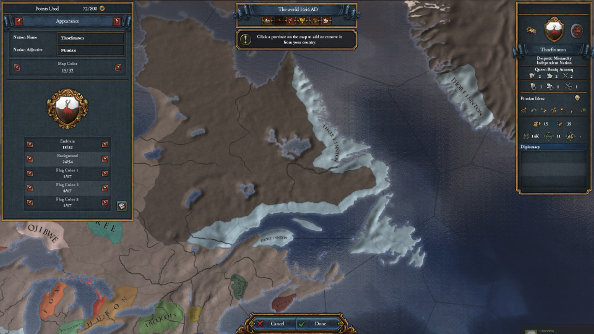 Problems arose when my conquistador ended up encountering the same events over and over again. Around four of them, repeated ad nauseum. EUIV does have lots of random, repeated events, but what made these ones bizarre was that they referred to specific people and places, and the same ones each time. So I encountered a horrible place called “Poison Rock” on no less than five occasions, spread across two continents. I also met people, watched them die, and then met them again hundreds of miles away, alive and kicking.

I was told that this shouldn’t happen, but it happened a lot.

Frankly, I’m not sold on the concept, as it feels like it diverts from the rest of the game instead of adding something to it. Paradox have really tried to make the Americas just as interesting as the Old World, but I don’t think this roleplaying side-adventure is as compelling a reason to sail across the Atlantic as the colonial system or the improved Native powers. It’s worth noting, though, that what Conquest of Paradise did for the Native American tribes, El Dorado promises to do for the South and Central American ones. The Aztecs and their fellow civilizations have been given more tools to play with, to better prepare them for the inevitable invasions from Europe. It’ll still be a struggle, though. 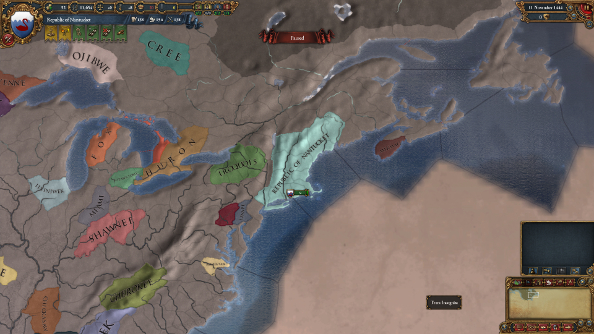 What has a much better chance of creating a parity between the Americas and Europe is the new randomised world feature. Scotland in the Middle East, Cyprus ruling the Russian Steppes, Chinese Dynasties fighting over Canada – it’s all barmy. It shuffles the deck, placing nations in the strangest locations, creating international disputes and diplomatic incidents that would otherwise be almost inconceivable. It’s a novelty, but also, I think, potentially refreshing for those who have poured hundreds of hours into the historical map.

Going even further, El Dorado introduces entirely customised nations, too. On the east coast of North America, I founded the nation of Scotworld. It’s like Scotland, but bigger, and vaguely Native American. National traits, leaders, heirs, flags, technology types, goals and nomenclature can all be customised, inspiring some extremely silly countries. Not Scotworld, though. That’s not silly.

As always, the launch of the DLC will be accompanied by a free update for everyone, patching in most of the new content for free.

Travel and accommodation provided by the publisher.