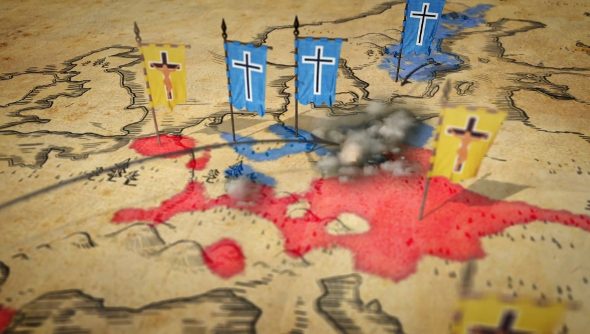 Paradox continues to be impossibly prolific, announcing two new expansions at Gamescom. Crusader Kings II gets its eighth major DLC in the form of Charlemagne, while Europa Universalis IV gets expanded with Art of War.

Expect new events, mechanics and design tweaks, some of which will come in the form of a free update as well as the premium DLC.

Charlemagne turns back time, adding another 100 years to CKII. With the new historical start of 769AD, counts, dukes, doges, kings and queens will be able to witness or participate in the birth of the Holy Roman Empire. Story events will chart the titular Charlemagne’s rise to power.

Novelly, the expansion will also include a “Chronicle”, detailing a player-dynasty’s victories and failures in love, war and religion. Players will be able to craft their own customised kingdoms, too, with custom names and banners.

Art of War is one for the warlords. Battle mechanics have been changed, allowing war mongerers to dispatch troops from sieges and transfer occupied lands to chums for safe keeping. And once they’ve gobbled up all the provinces they want, new diplomacy options will allow them to create client states “to support – or resist – revolutions,” inspired by the shenanigans of Napoleon.

On top of that, Paradox have filled with the Reformation system, creating unique in-game events just for the Thirty Years’ War.

That’s a lot of grand strategy.