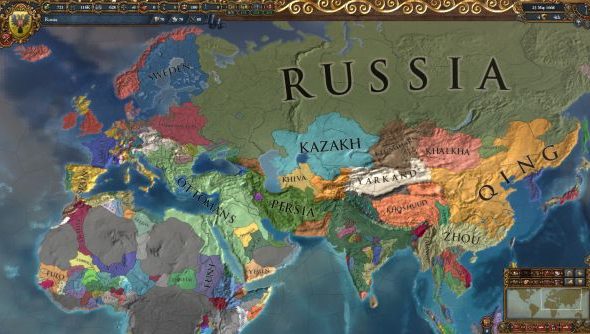 How about a bit of happiness to brighten up your morning? Publishers Paradox recently announced sales figures for their most recent batch of hyper-hardcore strategy titles and they’ve done incredibly well. It’s good not only for them, but for PC gaming as a whole to see these fairly niche products continue to find a home through high quality development and well thought out marketing. It’s also good for you directly, if you own Europa Universalis IV anyway, as they’ve released free DLC to go along with the announcement.

Developers of some of the best strategy games out there.

Between now and July 4, anyone with EU4 can grab the new DLC, Fredman’s Epistles, over on Steam for the low cost of $0.00 / £0.00 / €0.00. It’s not exactly game-changing stuff, adding a few traditional Swedish songs to the soundtrack based on the works of an 18th century poet, but it will start selling for $1.99 and local equivalents come July 5.

As for the sales figures, here’s what Paradox announced:

CEO Frederick Wester said that DLC is the key to their success, stating that these figures are only possible because they have “games that not only sell well at launch, but sell sustainably for years to come” thanks to them continuing “to provide ongoing support and development, and remaining connected to our community to understand what our players want from their time with our games.” He also priases PC as the perfect platform for this.

To celebrate, they also had a livestream of EU4 last night, the archive of which is embedded below.

All these games, and many more, are available over on Paradox’s own store. While we’re at it, here’s our reviews of Hearts of Iron IV and Stellaris.