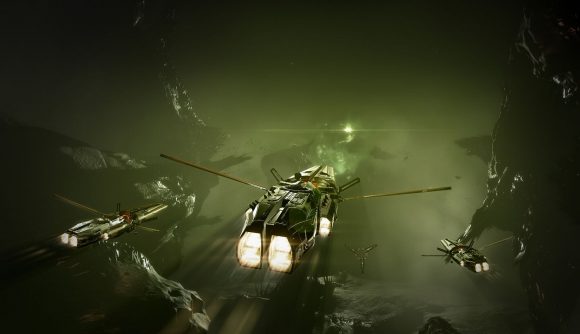 The Onslaught expansion for Eve Online is now live and available for free. It adds co-op play to Abyssal Deadspace (and a PvP section), new Upwell navigation structures, and an Activity Tracker.

When Abyssal Deadspace was added with the Into the Abyss expansion it was only available for solo play. That changes as of today, then, as it’s now available to Eve players of all experience levels, and can be played in co-op – you can have up to two other players join you in the high-risk, high-reward area. Difficulty tiers have been adjusted to accommodate for the increase in players the Onslaught expansion will encourage.

However, there’s more to it than that as a 1v1 PvP arena has been added to Abyssal Deadspace. You’ll find it at the end of your journey, accessible through an optional gate, but be warned as if you take on the challenge you risk losing everything you gained from Abyssal Deadspace. The victors get to take back their opponent’s haul while the loser gets nothing.

Speaking of your haul, two new Triglavian ships can be built from blueprints found in Abyssal Deadspace that have been added with Onslaught. They’re the first of their kind for their respective classes: “the Kikimora, a Triglavian Destroyer with enormous bonuses to range for its weapon systems and the Drekavac, a Triglavian Battlecruiser designed for deadly close-range brawl tactics.”

Developer CCP Games says two more ships will be available in the game next month. Those are the Rodiva Support Cruiser and the Zarmazd, which we’re told is “a Triglaivan Logistics Cruiser that will remotely buff the armour of other vessels.”

As said, that’s not all Onslaught brings to Eve Online today. Yes, it keeps going. The new expansion also adds new Upwell navigation structures, which replace Jump Bridges, letting you jump between two points in space. These also go towards having you create your own faster-than-light travel networks. Fancy.

Finally, there’s the Activity Tracker, which is available to all players, and lets you view the various activities available to you in the Eve Online universe. “It will show you what your character has achieved in New Eden and it will also show you what else there is to do,” lead developer Andie Nordgren told us previously.

So that is it. Everything in the new Onslaught expansion. If you need to see some of these features in action then have a watch of the video above as it gives a overview with moving images and sound. Technology these days.