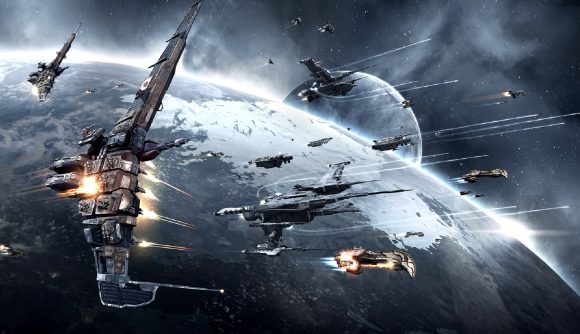 Eve Online is nearly old enough to buy cigarettes, and it’s stayed relevant for a remarkable stretch of that time. The community is leaving behind the most controversial bits of what developer CCP calls the Chaos Era, but CEO Hilmar Veigar Pétursson says that Eve Online wants to stay fresh and flexible. At least, that’s what the game tells him in dreams as it plots world domination.

“Think about it like Eve is an organism. Eve does not like where it’s going,” Pétursson tells PC Gamer in issue #337. “It’s no longer limber. It’s lost its stamina and mobility. It feels a little stiff. Eve comes to me in a dream and says, ‘Hilmar, release the hounds of war.’”

That, Pétursson says, is how the Chaos Era began. “That’s how it happened. It came to me in a dream and it said, ‘This cannot go on. I do not like this, this is not what I was meant to be.’ The game has a purpose. It wants to finish its mission, and its mission is much larger than what it has executed in the last 16 years.”

But what does Eve want? “I think its mission is world domination,” Pétursson says. “I think it wants to establish a new invention.” Just as the concepts of countries and companies had to be invented in the past, “At some point we didn’t understand what a virtual world that’s more meaningful than real life was, but Eve is on a mission to make that happen.”

For now, it’ll have to settle for being one of the best MMOs on PC. I wonder if there’s any hope of FF14 gaining sentience and creating new sociological concepts, especially with that Nier collaboration underway…