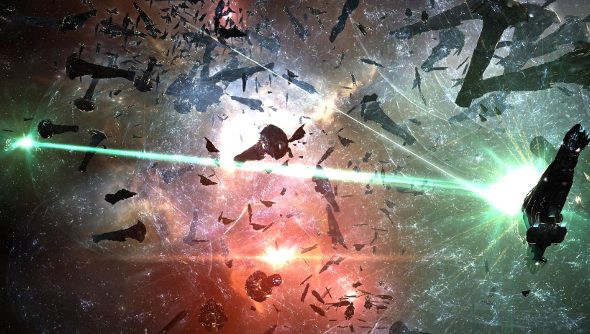 EVE Online’s players never fail to impress. CCP are caretakers – it’s the players that drive everything, and that’s never been more clear than when watching Rooks and Kings: Clarion Call 4.

It’s a sprawling account of Rooks and Kings’ development of a new – at the time – battle tactic: pipe bombing. Part historical documentary, part propaganda piece, it employs in-game battle footage from different perspectives, player comms and a slew of fan art and cinematics to tell the story.

Watch it, and then – if you haven’t already – reinstall the game.

The jumping around from in-game to meta narrative and the capturing of the perspectives of both friend and foe offers a very broad look at the universe of EVE Online. And even if you’ve never played, and some of the terms make bugger all sense to you, there’s still a lot to appreciate.

One of the highlights comes from one of Rooks and Kings’ tests of their pipe bombing strategy. Their victims’ reaction to the slaughter was recorded, as they arrived to what they thought would be a battle, but was really a soon-to-be mass grave.

“Are there any survivors?”

“I literally saw the light.”

CCP is trying to highlight the crazy, impressive stuff EVE’s community gets up to, and this was definitely one worth highlighting.