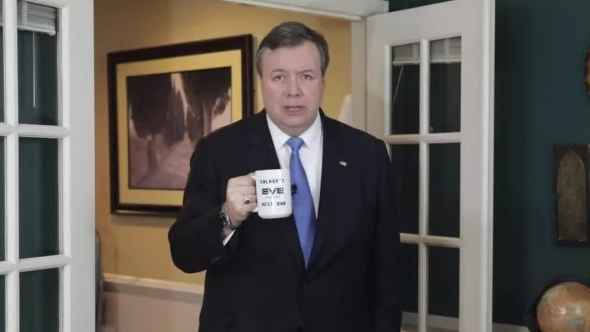 A real-life politician is running for election on Eve Online’s in-game government, the Council of Stellar Management (CSM).

Brian Schoeneman is a Republican lawyer and politician, who is currently serving as a lobbyist in the field of maritime law in the state of Virginia. He’s also a player of Eve Online, also known as Brisc Rubal, and now he wants to be part of the elected council.

Speaking with Kotaku, Schoeneman explained what he had to offer. “I think the largest single thing I can bring to the CSM is that I have been doing what is effectively the CSM’s role for my entire political career”.

“I am constantly going out and lobbying the government and trying to educate them on what my members think is important, and how what the government does affects my industry, all while making sure what we do is good for the country… If you replace ‘government’ with CCP, ‘union members’ with the player base, and ‘country’ with the game world, I’m already basically a CSM. It’s literally my day job.”

He goes on to describe his experience with Eve. “I’m an F1 jockey in the Initiative, not a fleet commander, or a diplomat, nothing special… I’ve been playing EVE since 2006, everything from High-Sec missions, Low-Sec PvP shenanigans, and now Null-Sec sovereignty warfare.”

When asked if he was worried if his Eve habits would negatively affect his real-life career, Schoeneman replied, “maybe 20 years ago this would be weird, but given how mainstream gaming has become with Twitch streamers and YouTube stars making millions of dollars, how can anyone say ‘You’re throwing your life away playing these games?’ I’d rather be attacked for playing EVE than for being a liar, or for doing something truly bad.”

You can check out his campaign video here. The Council serves as an intermediary between players and Eve developers CCP Games, consisting of ten players chosen by the community. Voting for this year’s election begins June 4. Eve Online’s new expansion Into The Abyss will be a single-player raid, and here’s everything you need to know about it.