Late last year, EVE: Online developers CCP teased the idea that trading skills between its players might be a possibility in the not too distant future. Now, Skill Trading has found its way to New Eden that allows players to swap “character experience from one character to another.”

There’s no space wasted on our list of best space games on PC.

Up to now, the Character Bazaar – a special forum where players could swap ISK for new characters – was what governed character trade. It kept players from getting duped by illegal account sales, however third-party services were nearly essential when shopping for the right character.

“We quickly realized that to make a significant improvement to using the Bazaar, we would be looking at a large web feature for browsing, buying, and selling characters,” reads a community blog post from October last year, in reference to the Bazaar. “We also discovered that the vast majority of complexity involved in character sales goes away if you make them more granular. Rather than requiring that characters be sold whole, we could allow them to be broken up and sold in chunks.

“This means that buyers get to retain all the individuality associated with their characters and sellers can make some money off their training mistakes or unused skills without having to part ways with an entire character.”

Now, Skill Trading makes all of that possible by way of the new Skill Injector and Skill Extraction items, both of which were teased in a blog post last month. Basically, if you want to add or sell skill points, you’re able to do so through these items, but Extractors always require a fixed amount of skill points to fill.

Injectors will give a different amount of skillpoints depending on what your character’s skill point total is when you use the item, in accordance with this scale:

“You mark skills for extraction until there are 500,000 skillpoints worth marked,” says CCP. “Once you’re happy with the skills you have chosen, you hit Accept. Now you will have a Skill Injector in your item hangar and the Skill Extractor you used will be gone, along with the 500,000 skillpoints.”

Here’s how trading will look, which does seem more straightforward than trading via a forum: 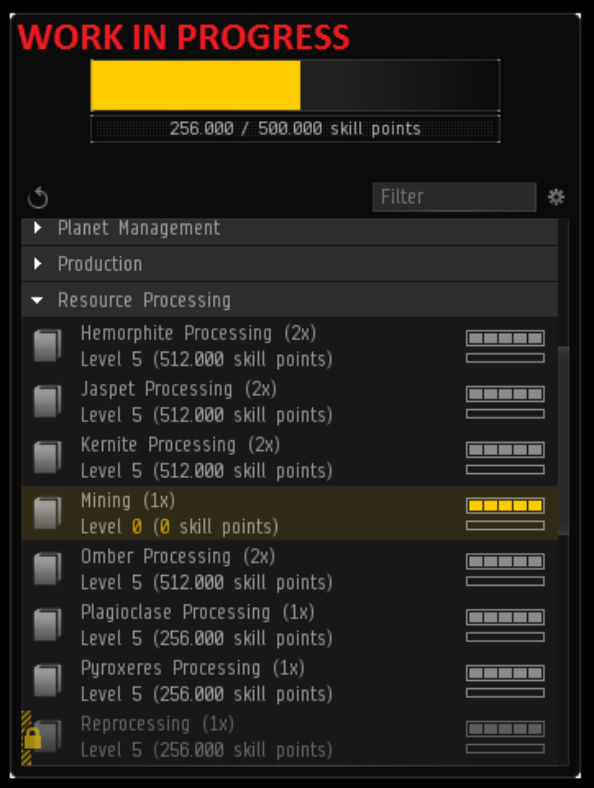