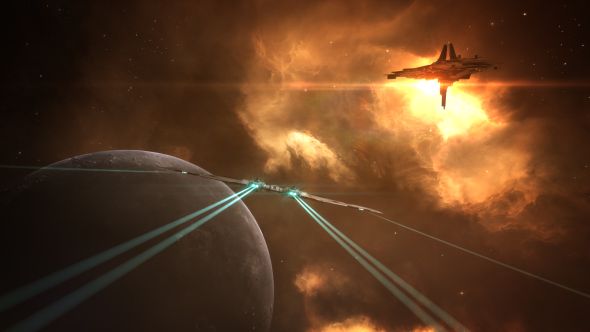 CCP’s huge space MMO Eve Online delivers yet another player-driven emergent story. In contrast to its galaxy-spanning battles and political manoeuvring, however, this is a tale of personal revenge, stewed at ice-cold temperatures over four years.

Super-size your gaming with the best MMOs on PC.

The tale comes courtesy of Eve player Darvo Thellere, whose Reddit username – FUiamDave – stands in challenge to all who cross him.

The latest such enemy goes by the name of kackpappe, who earned Darvo’s ire back in 2013. Starting one of the most complex MMOs in gaming is a daunting prospect at the best of times – see how Phil and Jordan handled it on our YouTube channel – but kackpappe made the unsporting decision to torment Darvo back when he was taking his first knock-kneed steps into space.

Drawn by the newb-support organisation Darvo founded, kackpappe embarked on a months-long campaign of harassment intended to ruin the game for him and his fellow beginners. It was then that Darvo vowed – most likely in blood, or via some kind of ancestral heirloom – to have his revenge. “I don’t know how or when,” Darvo told his nemesis, “but the day will come that I will find you and I will take all your stuff.”

Years later, and Darvo has become strong. He describes his focus on EVE’s PvP, on duelling other players in low-security space “not because of [kackpappe] but because I liked the thrill of the hunt.” We imagine some kind of Rocky-esque montage could and should be made of this preparation.

His patience was rewarded earlier this week, when he saw kackpappe was looking for a new corporation to join. Having founded the mercenrary alliance Ish-Stars, Darvo hatched a fiendish plan to wreak his revenge, but, ever honourable, he cleared it with his corporation’s members, because “being that kind of asshats is usually not what we do.”

Donning a disguise (that is, changing his name), Darvo seduced kackpappe into joining his corporation. He even “created political drama” with his former CEO – who was in on the plan – to justify his quarry teleporting via a cynosural field, with all his assets, right into Darvo’s trap.

Kackpappe was surrounded and immediately fired upon by a whole fleet of ships, which he had thought would be his new allies. Only when Darvo changed his name back to his original identity did kackpappe realise what was happening, his last words echoing through space like the cry of the damned: “argh fuck, Darvo Thellere”.

Here’s the record of the kill. Remember: play nice.