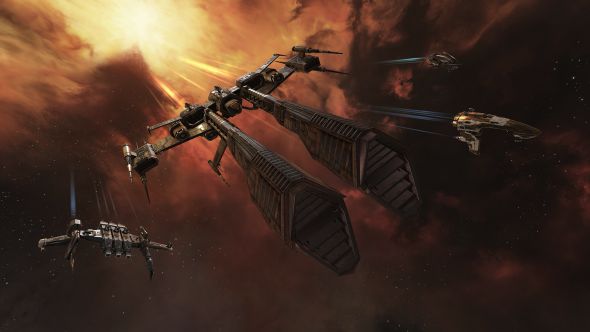 As Eve players may know, a rather lovely Secret Santa event to celebrate the holidays has taken place for some years now, started by the Goonswarm Federation folks. But when one user expressed dissatisfaction with his gift – in increasingly saline terms – they landed themselves on the community’s collective naughty list.

Is multiplayer action on an epic scale your thing? Check out our list of the best MMORPGs on PC.

After receiving a skin for a Purifier – a type of ship – Bneish Rankor posted an expletive-laden complaint that he “doesn’t even use [heresy redacted] Purifiers” and “would have liked anything else but a nasty looking skin.”

The consequences are detailed on Imgurand Reddit. After presumably being called on this attitude at getting given something for free, Rankor says the Secret Santa event should have a minimum value attached, and insists “you should reload forums if I’m posting I tend to edit stuff a lot”.

Someone then posts a link to his profile on zKillboard page, which shows that Rankor has at the very least used a Purifier in the past since he has eleven kills with one, second to his Jackdaw.

Rankor then lives up to his name by complaining further about the uselessness and meaninglessness of his gift. “My point is and still stands: This guy put little to no effort in giving me a meaningful gift”.

The point might stand, if it weren’t for the fact that the account giving the gift is apparently six days old. It’s doubtful that they were able to give anything much more valuable.

Rankor’s rancour didn’t go down well with the rest of the Goonswarm Federation, who according to user Hydrium, “brutally mocked [him] on Mumble for about an hour followed by a ban, a kick from the Alliance and a blacklist. It was hilarious.”

As if that weren’t punishment enough, NazAlGhul came up with the idea for everyone following the thread to send him one unit of carbon – the primary element in coal. It caught on, and according to one update several hours ago, he had received over 6,000 units.