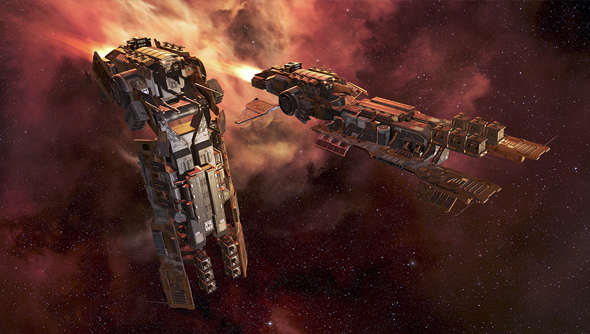 EVE’s Tiamat update has just gone live which means you can start building a Minmater Svipul, the new tactical destroyer class ship. The Svipul is a gunboat first and foremost, packing six turret slots buffed for artillery and autocannons, it also receives bonuses to armour and shields.

CCP’s Fozzie gives a breakdown of what’s been put into the latest update:

The flagship feature of Tiamat is that tactical destroyer. The Svipul is the second of four planned destroyers, one for each race. The first was the Amarr Confessor, which was a slower ship suited to laser fire more than long range artillery. Each tactical destroyer is able to fly in three modes – defense, sharpshooter, and propulsion. While in the different modes your ship will receive different bonuses. You can read more about it over on CCP’s blog post

Corporations are being given new controls, allowing them to say what is and isn’t an illegal action. So some corps may new allow for friendly fire among its ranks. See thisdevblogfor more details.

CCP’s audio work brings a general performance improements to the whole game but specifically the studio’s made turrets sound bassier and they’ve added new atmosphere sounds to the pirate faction. Graphics-wise, among other tweaks, ships now reflect light from nearby planets.

Some modules that received updates as part of the Module Tiericide initiative prior to Proteus have had their names updated to match the latest naming system:

Additional bonuses are available when one of three Tactical Destroyer Modes are active. Modes may be changed no more than once every 10 seconds.