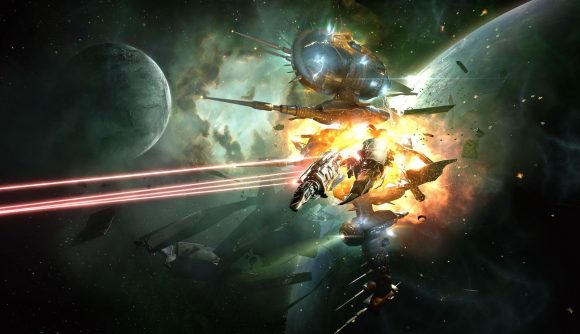 Can Easter eggs survive in the vacuum of space? It doesn’t matter, because in New Eden, you’ll be hunting escape pods. The Hunt, Eve Online’s annual Easter-adjacent event, is back on for the next two weeks, offering plenty of rewards to chase after in the free-to-play space game.

This year, you’ll want to dust off your best frigate or destroyer class ships, because once you’ve tracked down some mysterious Guristas capsules that are orbiting celestial bodies in “random star systems,” you’ll have keys to use to enter special combat sites that are only open to tier 1, tier 2, and faction ships of those classes. You’ll find those all across New Eden, but for a real challenge, head to Caldari Lowsec or the Guristas’ home region of Venal for tougher Huntmaster sites.

The combat sites involve two rooms – the first can be accessed by all players, while the second requires one of those keys you found in the Guristas capsules in order to enter. Clearing the second room will offer a chance at earning some special loot drops, so be on the lookout for those capsules: CCP says you can pinpoint their locations by using directional scanners or probes.

If combat isn’t your thing, you can still earn standard loot (and rewards that are normally reserved exclusively for combat) during The Hunt by visiting special exploration sites and completing hacking challenges. The same ship class limitations apply, so stick to frigates and destroyers if you’re going hunting.

The Hunt is on!

Speaking of hunting, the two-week period of The Hunt also features a 50% implant drop from players, so keep your head on a swivel for opportunities in both hisec and lowsec space. Further, you’ll earn a range of skins as login bonuses for firing up Eve Online for 10 of the 14 days of the event, and starting March 31, you’ll be able to pick up three months of Omega and three months of Multiple Character Training for 50% off if you buy the bundle.