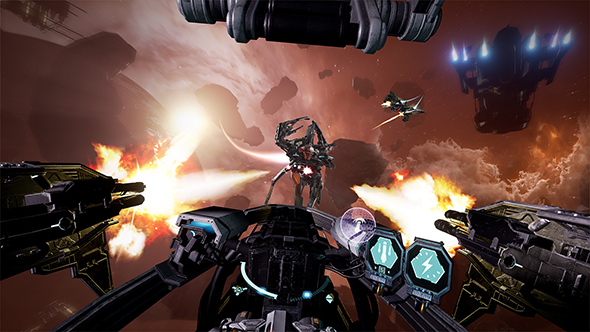 Eve developers CCP have so far been one of the world’s leading VR developers, but it seems that’s changing. The company announced today that they will be shifting away from VR development toward PC and mobile games, and that they’re shutting down two of their worldwide studios.

Check out the best VR games on PC.

CCP will shut down its Atlanta office and sell its Newcastle location, which were responsible for general VR development and Eve: Valkyrie respectively. This will affect roughly 1000 employees, but many are being offered positions elsewhere within the company.

That’s according to a report from Icelandic news site mbl.is, who spoke with CCP CEO Hilmar Veigar Pétursson on the news. Pétursson says they still have faith in VR gaming in the long run, even though they’ve no intentions of returning to that market in the short term. Nonetheless, he still suggests that virtual reality will end up changing the world.

“Despite the success of the VR games we have released we will be shifting our focus to our PC and mobile initiatives, and will be centralizing those initiatives, along with the support of our existing VR games, to our offices in Reykjavík and London,” saidPétursson in a prepared statement to us. “We will continue to support our VR games but will not be making material VR investments until we see market conditions that justify further investments beyond what we have already made. I am very proud of our VR games and, more importantly, of the people here who made them.”

CCP plan to announce additional game releases within the next 18 months, and their FPS Project Nova is still in development.

It’s a curious development given how central CCP had been in early VR development with titles like Eve: Valkyrie – but even that had recently been patched to work on standard screens. We don’t yet know what this means for Sparc, which seemed like one of the most promising virtual reality projects on the horizon.

Project Aurora was announced earlier this month, and will likely serve as a testing ground for CCP’s interest in mobile titles. I’d imagine that regardless of anything else, there’s little danger of them abandoning PC development, either.