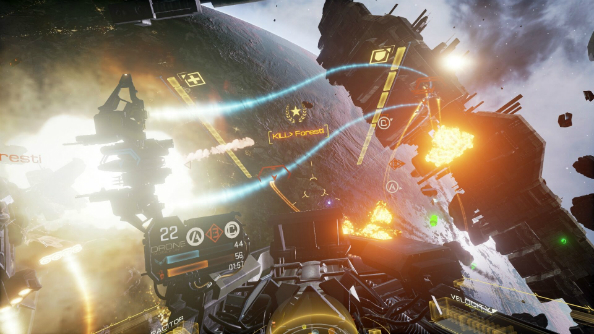 Virtual reality has exciting applications beyond gaming, but you do get the sense that for the platform to gain traction with a wide audience, games are going to have to do a lot of the heavy lifting. And for the whole endeavour to work, those games have to be built for VR from the ground up; designed to exploit the new potential of your fancy-pants goggles. CCP’s Eve: Valkyrie matches that description exactly, so it makes a lot of sense that the game’s to be included with all pre-orders of the consumer release of Oculus Rift.

Valkyrie’s parent game, Eve Online, is one of the best space games on PC. Will the VR dogfighting offspring follow in its footsteps? Let’s be honest: almost certainly.

Valkyrie makes use of Oculus’s unique interface by game-ifying the act of moving your head around to explore – to lock onto enemies with guided missiles, you need to keep them in your sights for a few seconds, and often that means swirling your neck around while pulling off stomach-churning barrel rolls. Its UI is also unlike any other VR experience I’ve played thus far, treating your line of sight as a cursor and allowing you to select menu items simply by looking at them. Smart.

Oculus founder Palmer Luckey had this to say: “Eve: Valkyrie is one of the most anticipated virtual reality games, and one of the first true VR games to go into development.

“It perfectly captures the promise of immersive gaming, shooting you into a sci-fi adventure as you pilot a spaceship in search of combat. Battling your friends (and enemies) in multiplayer space dogfights is the ultimate VR thrill, and we’re excited to partner with CCP to bring this experience to Rift owners everywhere.”

It positions Valkyrie as the early ambassador for VR games, so it’ll be interesting to see how many curious non-gamers can be coaxed into deep space combat when Oculus Rift releases early next year.