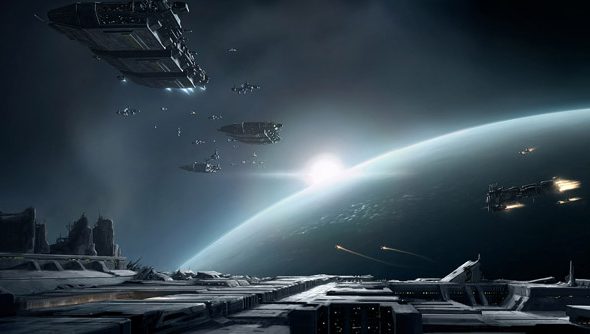 When Playstation 3 players boot up CCP’s DUST 514 they’re teleported into a dull metal cabin: a place with all the charm of the inside of a cargo container. There are no windows. No way of realising the size, scale and cynicism of the world you’ve just entered.

The players in CCP’s first-person shooter don’t get to see what Eve is really about: they’re contained in a claustrophobic annex: cut off from the majesty that has enraptured more than 400,000 PC players.

This feels like a mistake. But speaking to CCP last week at their headquarters in Reykjavik, Iceland, I learned something of what it will take to knock those walls down.

It’s not a mistake. It’s a process.

Today sees Dust 514, the free-to-play shooter for the Playstation 3 that takes place on the same servers as Eve, enter open beta. Theoretically, today could see millions of players enter New Eden. Even after ten years of steady growth, Eve has never seen more than half a million registered accounts. You can see why CCP may be keen to limit the damage they could to the summation of ten year’s work.

The developer is very much trying to ease the two games together gently, if you picture Eve and Dust as the two circles of a venn diagram, the overlap between them is a tiny sliver of the whole. Granted, that sliver currently contains orbital laser cannons.

Though even these orbital strikes are tightly regulated, an Eve player currently “can’t bombard a planet,” Eve’s lead designer Kristofter Touborg tells me. “The strikes are something [Dust players] have to radio down. So you have to have someone who sends the coordinates from the planet and then you can do it. At least on this first phase, there will be a lot more of that as [development] goes along”.

“This is really important for people to understand,” CCP’s resident economist Dr Eyjolfur Gudmundsson says. “We are not saying we have delivered everything [that Dust will be] when it has come out. This is the first step. It took us 10 years to get Eve to where Eve is today. This is the first step on a journey of Eve and Dust together. There will be a second decade of development. Stuff will be added consistently on an expansion-based basis.”

That concept of ‘as development goes along’ is something which kept coming up in my discussions. “I don’t think that you understand that as a gamer until you are taught this process,” Gudmundsson continued. “That you are reminded that Eve is a game that receives two free expansions a year, you are reminded that is all on the same shard, and you are reminded that it has been growing consistently for ten years because the community has been building up on social interaction.This is a model that no one else has. We’re taking that model and we’re putting it onto a console game – that’s never been done before – and connecting it to a PC world – that’s never been done before – and we’re going to continue to iterate on that. I really feel that it’s important that people understand that there is so many new things here, that it’s not just another shooter coming out.”

I get the sense that “just another shooter” is something that’s been said a number of times in feedback to CCP. I can understand that, though. From what I’ve played of Dust, it largely feels like a drabber Battlefield. Rated on its current state, and to be absolutely clear, its release state, Dust is a little dull. It’s an OK squad shooter. I didn’t get to see the PvE mode, where you team up with many other mercs and shoot at robots, but that won’t raise the game up into something remarkably different. But that’s to miss the bigger picture. Unfortunately, seeing a bigger picture is difficult. Seeing the whole picture is impossible unless you fly to Iceland and see it for yourself.
.
I found myself in a situation few players will be privy to: in a room somewhere in their studio sixteen staff were fighting over a map in Dust: one of the squad leader’s views was streamed to a projector in the conference room where we were sitting. Next to this projection was a second screen showing a CCP player in Eve. They showed the process of calling in an orbital strike: the Dust squad leader sent a message through the Eve chat client to the Eve player, he then undocked from the station he was holed up in, warped to the planet, flew into orbit. This opened up the option for the Dust player to target the strikes that Touborg was talking about. The Eve player was then able to fire.

From a Dust player’s perspective, sat on a Playstation 3 (Dust remains a Playstation exclusive game, but we’re convinced it will appear on the PC) without the window into the Eve galaxy CCP provided. Yes, the squad leader called in support via chat, a human interaction: but everything after could have happened in any game with a super weapon. They see nothing of the ship that fires the beam or how they came into orbit above the planet.

Communicating this connection must be a struggle for CCP.

It goes deeper than that, though, as Gudmundsson explained, “Eve has many, many faces. Often the depth happens [outside the game] rather than something that’s on the screen.” Meaning that the game itself is simply a window onto a sandbox of integrated systems, a cohesive society and a real economy. Some of these systems are visible, others not, and some are not systems within the game but instead structures developed by the players to fulfil high level operations that the game itself cannot currently cater for; Alliance leaders, for instance, rarely log on to Eve; much of their play is the administration and organisation of thousands of players via email, Skype and Excel documents.

How do you convey to the wealth of new Playstation players that some of the most influential Eve players rarely actually play Eve? That, besides that occasional orbital laser, there’s a whole universe playing out above their heads in every battle, a universe of soldiers, spies, traders, and explorers? Part of what’s obscuring this universe’s depth is that it’s currently kept artificially shallow. At launch, the real economy at the centre of Eve Online (and the source of most of its most famous stories), won’t bepresent in Dust. It instead has its own economy modelled on Eve, but with NPC traders replacing the famously devious players of Tranquility.

“We are treading in completely new waters and we do not want to sink on the first day,” Gudmundsson explains. “It is a funny thing that we are in Iceland. It is a strange situation that I find myself in as an economist. You know that Iceland has currency control laws after the crash in 2008? It is meant to stop money leaving Iceland because there is too much money here, there is too much demand for foreign currency. So we have currency control to try and stop that flow in order to avoid a huge crash of the local currency. This is a non-ideal situation in any economy because it limits the free movement of capital between countries and so on, and all economists will say this needs to go away as soon as possible. But we are going to start with the exact same thing between Eve and Dust.

“We are going to monitor the flow of money between the two universes in such a way that to begin with there will be none. Then we will open up flow from one end to the other – from Eve to Dust – and we will have a taxation on that one. In the beginning it will be heavily taxed while we are understanding the flows and the demand for moving money from Eve to Dust.”

If Eve players, with all their stored cash, were able to loan money to Dust players from the off we’d likely see a huge rise in inflation as the Dust players used their loans to buy the best kit, willing to pay any price for it.

Then, the second phase, the one way flow Gudmundsson speaks of, will begin. This is going to be in the form of contracts. Eve corporations will be able to employ Dust mercenary groups to attack specific planets, paying them for the job. Those funds that come in will be taxed, limiting the flow of money into the market and so limiting the risk of destabilising it, but it will also be the first time the two economies will be linked. The next phase, which may not arrive for months, possibly even more than a year or closer to two, is the most exciting: “The future vision is that there will be not only ISK movements between the worlds but also resource and material movements,” says Gudmundsson. Think about it, ore mined in Eve is sold on the market to another player who refines it and sells it to a manufacturer, who makes it into a dropsuit attachment, which is then bought by a Dust player and then worn into battle, possibly even in a contract that pits him against that original miner’s corporation. It opens the possibility for Dust players to become traders, buying and selling on the market to make their ISK, not needing to take out contracts and risk their equipment fighting for some faceless space corp.

It won’t happen this year: nor maybe the next.

But eventually that gunmetal, windowless cabin we started with will become its own hub connected to a vibrantly connected universe. Lying under the surface of the vidiscreens that line its walls will be a world of hundreds of thousands of players, an industry poised to fuel an endless interplanetary war between alliances of corporations teeming with soldiers, miners, merchants, diplomats, and spies. A universe populated with players spread across two platforms. It’s all there just beyond the screen. CCP just have to help players realise it.

Editor’s note: travel and accommodation to Iceland were paid for by CCP.