“What do you say to a bot with two black eyes? Nothing you told ‘em twice” is a poorly repurposed sexist joke that may have been uttered many times about the CCP offices today (though likely not as they’re lovely folk who wouldn’t indulge in that sort of behaviour). That’s because today saw CCP change their anti-bot policy from a ‘three-strikes and you’re out’ system to a ‘two strikes and you’re no longer welcome in this sector of space, sonny’ system.

Back in 2012 CCP announced that to fight nefarious players exploiting the game with external bot software and engaging in real money trading (where you sell something from the game for real cash) they would implement a rigid system of suspensions and bannings. Now my memory’s a little hazy but I think it went exactly like this:

You can see the result of the system below: 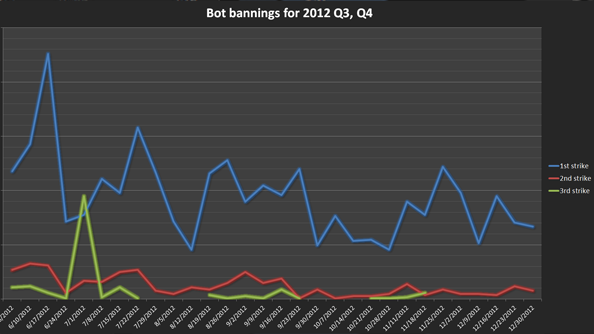 A steady drop off in the number of first time offenses is obvious. However, though the second time offenses have dropped there was a little resurgence in the latter part of the year. As a result of this CCP are developing their system further, moving to a permanent ban sooner:

Associate QA tester CCP Stillman said he hopes that this system “reflects our increased efforts towards stopping people from engaging in behavior that is damaging to New Eden and all of you who play by the rules.”

When I went to CCP’s offices earlier this year we were whisked past the internal security department, though I caught a glimpse through its shades to see a man with bloodied fists beating a bot strapped to a chair, he was shouting “Who do you work for?”. They’re the dark knights who keep our nul sec safe.