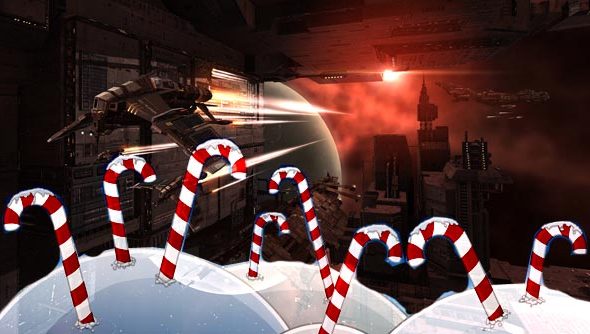 EVE Online may have its brows so high that some satellites are closer to ground level but that’s not stopping its developer, CCP, from throwing around some Christmas cheer. Over the next month there will be gifts, snowball fights, and carollers. Ok, there won’t be any carollers.

Posting on EVE’s homepage, CCP have begun hinting at what players can expect over the next month:

“CONCORD has survived almost ten years of your insanity and they want to thank you for always keeping things exciting. Expect to discover several packages in your redeeming center throughout the month filled with a few popular classics and several surprises to light up your holidays.”

They’ve not gone into details but on 13 December there’s a scheduled snowball fight with a new launcher and ammo to go with it. Then, on the 20 December, you can open up a mystery box – I’m hoping that one of them is opened by a green player and it contains a capital ship. Finally, on the 27 December, the most cryptic message “You’ll have a blast, and they’ll never melt”.

The gifts are open to all current subscribers and for anyone who subscribes during December (they even get past gifts retroactively).