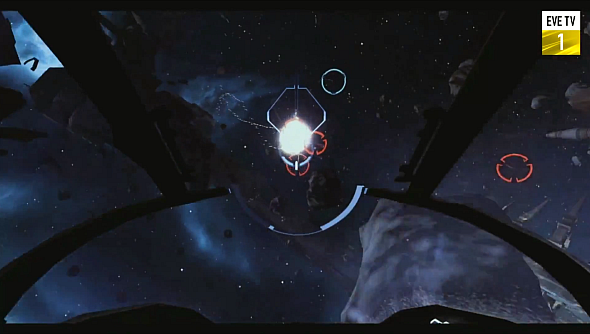 Whipping my head round to trace the path of a rocket that was rapidly closing on my rear, looking for the moment to hit my afterburner and escape the payload before it connected with my fighter’s fuselage… that was the moment that EVR came together. EVR is special. EVR is new. EVR is a 6v6 space dogfighting game, built for the Oculus Rift and set in the Eve universe, taking place in the violent cold blacknews of New Eden.

But it leaves a question. What does this mean for Eve Online?

First, check out the official trailer:

To be clear from the off, CCP are not integrating Oculus technology into EVE Online. At least, not yet. EVR is a side project, which a small group of developers have been working on in their spare time for the past seven weeks. It’s possible that it may never see a wider audience than this year’s Fanfest attendees, who can play it on the final day of this year’s convention. The game isn’t even running in Eve’s game engine – it’s running in Unity with some of the art assets from the space MMO, though even these have largely been recreated for a higher level of fidelity.

Caveats away, know this: EVR is ridiculously good fun.

The game’s premise is simple: you play as one of a squad of fighters for either the Amarr or the Minmatar. The two factions have battleships stationed on opposing sides of an asteroid field and they’re launching you out of the fighter tubes Battlestar Galactica-style. You’re limited to only three minutes of flight time; but with the speed of the combat I found this was plenty of time to die multiple times, both by being blasted into shribbons by the aforementioned rockets and also by going in for too close an inspection of the asteroids that litter the battlefield.

Here’s a video of EVR in action:

According to CCP artist Andy Robinson players would insist on staring straight ahead, despite the freedom the Rift offers, so the team hit on the missile lock mechanic. While the right trigger on the gamepad fires off a pulse laser that’s locked to your nose reticle, holding the left trigger brings up a grey target finder which is linked to your Oculus view. So, when you turn your head the target finder moves with you. Holding the reticle over an enemy ship for a short while gets you a lock and lets you fire off a homing missile. The trick of it is that it gets the players looking around the fighter’s canopy, taking in the full 3D vista that surrounds them.

It’s always struck me as odd that Doom 3 was the taster game during Oculus Rift demos back when it was announced, it’s not a natural fit for the technology. Yes, the Oculus puts you into the headspace of the protagonist but having full head control while body movement is locked down to a gamepad seems unintuitive. The disconnect between the two motions is jarring. By contrast, EVR is a perfect fit. In the game’s fiction, you’re a pilot locked into a seated position, your interactions are through a controller both in real life and in the fighter’s cockpit. It seemed so natural a position to find myself in that it was odd little things that broke my immersion, like seeing that my in-game legs weren’t kicking with excitement like my real life ones were.

I’d be surprised if EVR isn’t ever released in some form: it would make an ideal tech demo to be packaged with the consumer version of the Rift. But if it doesn’t ever get to be released to the public, it shows the potential VR has to influence the next generation of PC games. Hopefully, Chris Roberts needs to be reading some of the reactions players will be having. Frankly, I’d be tempted never to quit Star Citizen if it can capture the in-cockpit experience as well as EVR.

I wonder if Oculus support can be modded into Diaspora…

For more from Fanfest, here’s our quick summary of the Eve keynote.