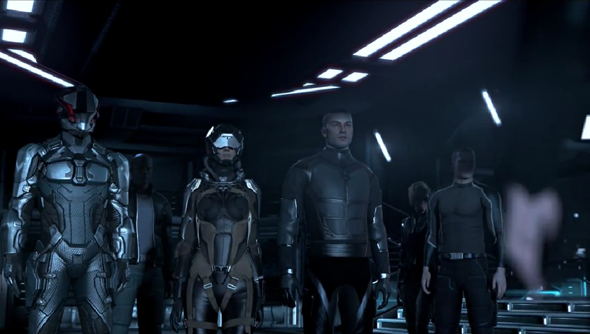 Separate to making one of the best MMOs around, CCP have a knack for awesome trailers. With each expansion they’d release a video which drew attention to new features while also being full of pretty explosions and spaceships.

The Prophecy is no different, it shows CCP’s new focus on Eve as a universe, one where Eve: Online, Valkyrie, Legion, and Dust 514 all exist coherently. And it looks bloody marvellous.

The focus of this trailer, drawing the different Eve games together by showing individual Valkyrie fighters and Legion troops boarding troops amid a vast ship battle, adds a little sense to another recent CCP decision, cancelling World of Darkness. It just doesn’t fit in with the rest of CCP’s games.

Speaking to Polygon about the demise of World of Darkness, CCP CEO Hilmar Veigar Pétursson said “It is extremely difficult because the idea and the concept are terribly inspirational and powerful, we really had to be honest with ourselves. This is not trending towards what we were hoping or planning for in the beginning […] So, even though it was extremely difficult, this was the time where it’s OK, we have given it all we’ve got for now. Better to stop it, and company to go focus on the EVE universe.”

I can’t wait to see what comes out of CCP, though, now they’re solely focussed on Eve games and tying them altogether.