New Eden has once again been the scene of a huge engagement, this time the result of a clever bait by the Black Legion alliance. Using one of their precious Super Carriers – one of the biggest and most expensive ships in EVE Online – they managed to bait the RAZOR alliance into a trap. It wasn’t long before the event escalated into a full blown Super Capital ship warfare from both coalitions of CFC and N3.

It was a bloody battle with over 500 billion ISK ($10,000) worth of ships destroyed, and luckily I was online and nearby to view the whole thing go down.

Update:The article originally stated that Black Legion used a Titan to bait RAZOR. This was incorrect, and it was actually an Aeon (Amarr Super Carrier). There was however an Erebus Titan in the system which likely provided armour bonuses to the Black Legion fleet.

The fight occurred when Black Legion purposefully baited the RAZOR alliance with one of their own Super Carriers. In the low-sec system of Daras, RAZOR were led to believe to have successfully trapped the Black Legion Super Carrier. This belief was instantly shattered when Black Legion along with other alliances of the N3 coalition jumped in to engage. In response, RAZOR called on their allies of the CFC coalition to try and even the odds. The whole engagement escalated so quickly that CCP’s own ‘Time Dilation’ technology quickly kicked in, slowing everything down to a mere 10% of real-time speed. 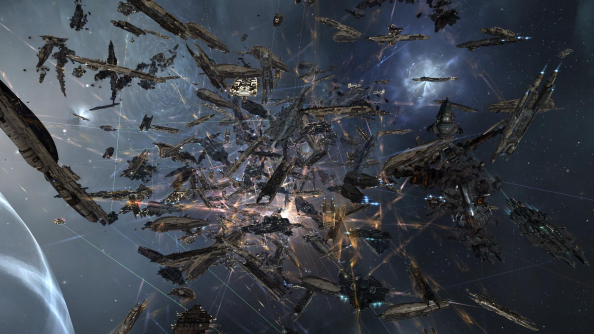 By the time I arrived on the scene – accompanied with my corporation Hounds of War – the battle was in full swing. The time dilation made taking any action within the system painstakingly slow, but also allowed you to fully take in the scale of the conflict. A quick scan on my onboard scanner revealed over a thousand ships were present: 200 Carriers, 130 Super Carriers, 70 Dreadnoughts and the single Titan.

Other big names had also showed up to the fight such as Pandemic Legion and Test Alliance Please Ignore to try and jump on some killmails (records that show proof of kill). Rumour has it that Pandemic Legion actually agreed to help CFC destroy the Black Legion Super Carrier, but instead opened fire on CFC. “PL indicated to the CFC they would help kill BL then turned on CFC. Important lesson: don’t trust PL.” said one Goonswarm pilot. Even though Pandemic Legion has a notorious reputation of distrust, they’ve denied the accusation.

CFC managed to extract the majority of their Super Capital fleet, but at least ten were trapped by the opposing forces. Black Legion fielded huge Dreadnought class ships that when sieged up are designed to obliterate big ships like Super Carriers. Even though some Dreadnoughts were lost, CFC lost all of their Super Carriers that were trapped. N3 and Pandemic Legion managed to bag the biggest kill of the day with a Super Capital from the Goonswarm Federation, worth over 60 billion ISK. 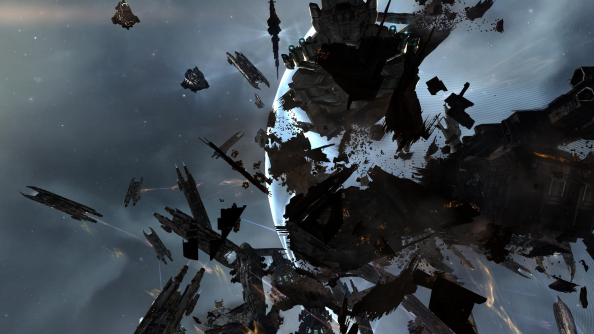 The sheer excess of destruction left capital ship debris floating all over space. Pilots from every faction were flying around in between the mammoth laser show, trying to scoop up valuable loot and salvage to help buffer against their losses. As the last Super Carrier from CFC fell, Black Legion, N3 and Pandemic Legion turned their focus to smaller Carriers and prey.

I was potentially one of those smaller prey, so I decided it was a good time as any to bail out to the safety of a nearby station. As the kill-mails were submitted and the killboards updated the total ISK lost was over 500 billion, which translates to over $10,000 when converted via PLEX. I managed to get myself onto 30 billion ISK of killmails by snipping some of the Carriers, which in-turn has dramatically improved my own killboard.

You usually only hear about these sort of engagements in null-sec – where space is ruled entirely by players – but sometimes they spill into boundary before the relative safety of high-sec. This was the first time I’ve witnessed it occur in low-sec space first hand, and I’m sure it won’t be the last. It might not have a scratch on the battle of B-R5RB, where over ten trillion ISK was lost worth an estimated $300,000, but it has certainly made my first week back in EVE Online a memorable one.

Were you there at the battle of Daras?