The last time I played EVE Online was five years ago. I was in a corporation whose name I can no longer remember. My job was to drive a huge freighter ship around an asteroid belt so that smaller mining ships could deposit their hauls and get back to shooting rocks with their lasers. I’d do this for hours, collecting ore, opening up my cargo hold to accept my colleagues’ valuable dirt, warping back to the nearest station to dump it and then returning to the belt to fill up again. I was a truck driver. In space. An interstellar Eddie Stobbart.

At this month’s EVE Fanfest, I wondered if any of the men and women in attendance had once shoved a filthy chunk of ‘roid into my capacious bay. Maybe they would remember me and all the good work I had done. Or maybe I’d thoughtlessly logged off and locked a tasty haul of spacedirt inside my ship, and they were furious. The compound interest on a boot full of six year old minerals could be worth billions.

No, I was better off keeping quiet. My half-forgotten understanding of how EVE works would hardly impress the general Fanfest audience, who regularly meet news of fractions of a percent increases in mining yields with rapturous and genuine applause. They’re an unerringly excellent and welcoming bunch of people, EVE players, more mature than your usual convention attendees (EVE Online’s playerbase skews towards the 25-35 age range) which means they’re generally more self-aware and better dressed. Keynotes were peppered with EVE Online in-jokes, but the mood remained inclusive and accessible to both retired players and the blissfully ignorant. 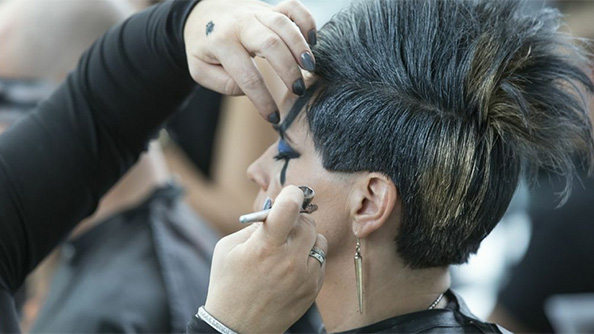 There were families, people who had travelled alone or with partners, people in hats, people not in hats, folks who had used the on-site facepainting service to deck themselves out as their EVE Universe avatar. There was also a tattoo artist there, facilitating mistakes. A huge wall of merchandise dominated one corner of the convention hall, which was itself a spectacular and multi-faceted glass monument jutting out of Reykjavik’s harbour. Its floors and walls were drunkenly tilted at perspective poisoning angles, enhancing the surreality of the event.

Outside the convention centre, the influence of EVE Fanfest touched every inch of the city. A few dozen bars and restaurants gave hefty discounts to attendees. Billboards across Reykjavik celebrated the international gathering of fans of internet spaceships with huge advertisements for the Fanfest. Regular old Icelanders in bars would nod in recognition if you mentioned CCP, some with no small amount of pride. Whether or not they played it, every last one of them knew about it and understood what it was. It is, after all, now bigger than Bjork.

Before the Fanfest officially started, the city’s mayor unveiled a twelve foot tall monument to EVE Online just outside CCP’s offices. Waving his ceremonial unveiling knife, the mayor declared that he didn’t believe in reality, or time, or that any one of us were real, before cutting the rope and revealing the sculpture. On its base were inscribed the names of tens of thousands of EVE Online players, which fans almost immediately took to crawling all over in an effort to find their own names. 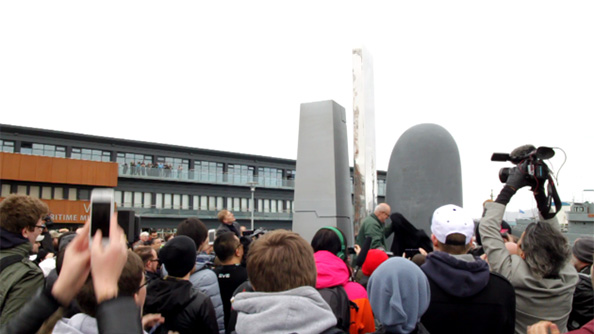 Before the Fanfest officially ended the monument had been vandalised numerous times. The first was arguably in keeping with the anarchic tone of one of EVE Online’s largest corporations: an easily removable Goonswarm sticker applied high atop the monument’s tallest pillar. The second wasn’t: a scratching out of the name of an unpopular player that was met with outrage and disappointment from the fanbase, as well as a slew of bans from CCP.

Talks and roundtable discussions ran every day, ranging from delightfully esoteric essays on the minutiae of EVE’s economy to more broadly relatable news items, such as the revelations that Starbuck will be voicing EVE Valkyrie’s lead character and that Project Legion will be standing on Dust 514’s shoulders and, perhaps, throat. Throughout, attendees had the opportunity to try out EVE Valkyrie on both Oculus Rift and Sony’s Morpheus headsets. Once satisfied with gazing through a magic window into a fictional three-dimensional universe crafted by the arrogant hand of man, players were treated to three evenings of entertainment. 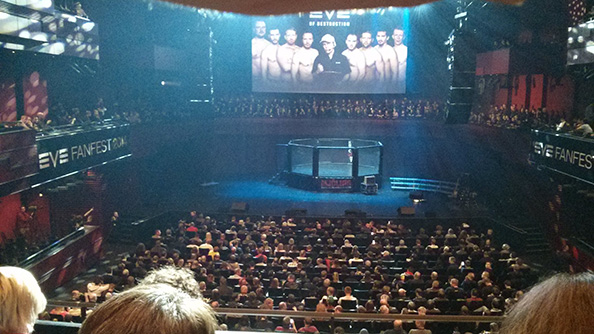 This was followed by an invitation to an MMA fight, at which ten of CCP’s strongest developers would take on upcoming Icelandic superstar fighter Gunnar Nelson. In turn, the undefeated MMA fighter hugged each opponent into a sleepy submission in a manner that appeared gentle and effortless but must have been anything but. The highly technical — and quite serious, Gunnar wasn’t handing CCP any opportunities — grapple-only scrap ended with increasingly buff CCP devs descending from the rafters on wires, a sort of gladiatorial comedy helped along by fan favourite CCP Guard’s hilariously optimistic commentary.

The Fanfest closed with a party at the Harpa convention centre, which included a DJ who mixed EVE sound effects into his set, much to the roaring delight of the assembled EVE fans, who were exhausted enough by now that shouting at sounds they recognised in a dark room made perfect sense. It was an energetic show that drew a heartwarming couple of days to a close. 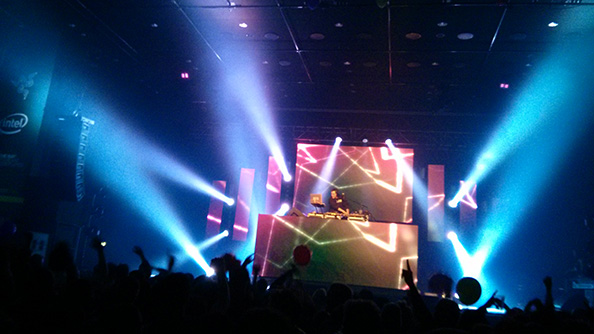 This year’s Fanfest wasn’t EVE Online’s largest — last year’s celebrated ten years of EVE Online, and so drew an even larger audience — but the playerbase continues to grow. Now in its eleventh year, EVE Online is the only MMO of its ilk that’s attracting players faster than they leave. If the two thousand attendees of Fanfest are representative of the community, it’s easy to see why.

The MMO is renowned for being an arcane and unknowable thing, a sort of space-spreadsheet boogieman, but its strength is in its unflinchingly welcoming community. EVE Online has no doubt transformed several times since I hauled bits of asteroid, but the people playing it have remained the same. And they’re lovely.