In 2010, Leodavinci joined the fledgling Dreddit corporation, founded in Eve Online by users on an /r/gaming thread. By 2012, he was head diplomat and occasional leader of Test Alliance Please Ignore, then the largest alliance in the game.

“The best way to describe running an Eve alliance is like being a CEO of a major multinational company,” he told users in a Reddit AMA. “Except nobody gets paid but a shit ton of work still has to get done.”

Leo rarely logged into Eve during his tenure. “Occasionally during really hectic times I’d pitch in,” he wrote, “but for the most part rallying the troops and coordinating everyone is the most important thing”.

In his role at Test, he helped keep tabs on a sprawling organisational structure, which encompassed Fleet Command, Diplomacy and Propaganda, as well as some necessary mundanity – IT, Accounting and Human Resources.

“HR had to heavily vet people as allowing an enemy agent in can be very costly,” explained Leo. “[We] had a whole HR system that automatically checked Eve API’s for their history, questionable transactions etc.”

Logistics, too, could prove “incredibly boring” – except during major conflicts.

“When in a war logistics can be very harrowing and stimulating,” said Leo. “You need to get expensive, massive, slow, defenseless ships full of important things into an enemy held system to put down a POS (a mini base with a force field where the good guys can stage from).

“This takes hours, and you have to keep the enemy from blowing your shit up.”

Leo worked his way up in Diplomacy, however – “arguably the most important team”. There, alliance members mediate in everything from “level level dumb bullshit like stupid friendly fire incidents” to “forming coalitions with other alliances, making you the master of a space empire ranging over thousands of systems”.

Most of that negotiation, it turns out, happens anywhere but Eve.

“Diplomacy is mostly getting to know other space important people by playing various games other than Eve,” explained Leo. “Lots of Tribes Ascend, BF3, and World of Tanks.” 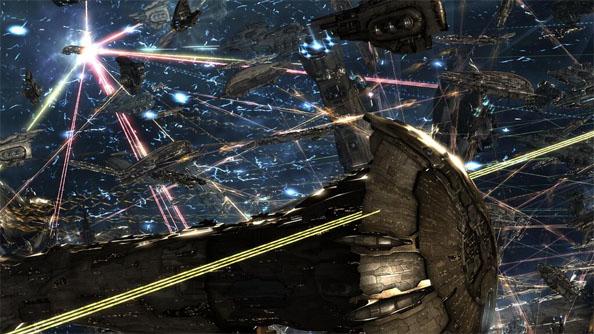 Once Leo had ascended to the very top of the Eve metagame, however – when “starting a massive coalition level war wasn’t possible for various reasons” – he found there was nothing left to aspire to.

“To be honest, I never really got hooked by the actual game play of Eve, I was hooked by the metagame and the politics,” he explained.

“To me, the actual game play is okay, but nothing to hold my attention like it did. The fun part for me was dealing with other people, the politics and metagaming that goes on. It is the closest I’ll ever get to leading a country.

“A lot of the leadership types love games by Paradox, the guys who make Victoria and Crusader Kings,” he added. “Myself included.”

Asked about yesterday’s largest ever Eve battle, Leo said he had “very conflicted feelings”. Despite having an early hand in the creation of the winning side – the Clusterfuck Coalition – he’s unambiguous in his disliking for coalition figurehead The Mittani – “the most egotistical person I have ever met”.

“He’ll stab you in the back the second you do anything he doesn’t expressly approve of, but he will do it in a way that no one will even see that he is the one holding the knife,” said Leo. “No one else in Eve has ever been as good at alliance and coalition building as he is. He is completely pragmatic, and the ends definitely justify the means with him.

“His goal as far as I can tell is to sit atop Eve and be the most powerful person in space, and that means building a group that spans half the galaxy while allowing the illusion of there being competition so that infighting and boredom doesn’t set in,” Leo went on.

“I hate this whole idea – I want there to be real risk in nullsec, with many smaller groups fighting it out game of thrones style, with constantly changing loyalties. It probably isn’t realistic, but it’s what I want.”

Do you agree? Or do you enjoy watching The Mittani’s machinations play out?