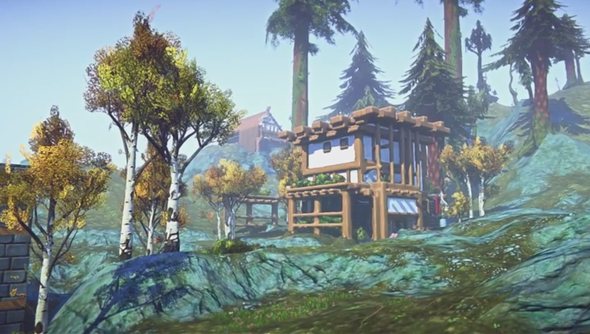 We still only know the cusp of what SOE have planned in EverQuest Next. Their MMO aims to break from conventions laid down since the original EverQuest, no D&D ruleset, destructible terrain, dynamic events and AI. It’s all very fancy. However, before we get our hands on it we’ve Landmark to play through.

The tie-in game is a little like Minecraft in that you’ve a world to explore and resources to collect with which to build impressive structures but your structures can then be sold to other players for real money.

SOE have put out a video that explains this all a little better.

So you can see how you’ll have some pretty powerful building tools to work with. So far we’re being shown buildings which are made in the fantasy stylings of the world of EverQuest but you’re free to construct things in whatever style you want. I’m looking forward to a 1:1 recreation of the Death Star.

We’ve still not been told the full details of Landmark, however. It will be free-to-play and the Founder’s Pack goodies reveal that you’ll be able to expand your inventory by buying new slots, and buy items that will make resource collection easier. It’s not yet clear how much work will go into collecting resources before you can make the house and tower shown in the video above. It might be hours of work, in which case it seems a little less freeing as an asset creation tool.

We should learn more between now and the launch of Landmark’s alpha on the 31 March.