Twenty years later, Everquest is still around – one of the most popular and influential of the pre-WoW MMORPGs is due to get its 26th expansion this December. But as you may have noticed, nostalgia is common these days – especially in the MMORPG world – and a group of misty-eyed fans are launching a classic Everquest server.

Under the umbrella name Project 1999, the server will recreate Everquest in its purest and earliest format, down to its early patch progression. The new PvE server aims to recreate the 1999-2001 experience of Everquest for all to enjoy.

The plan for Project 1999 is to start at the very beginning of what Everquest once was. Starting October 25, Project 1999: Green will be released, creating a server at the very base level of the original Everquest – and as the months progress patches and changes will be introduced exactly as they were to the original Everquest once was, including the Ruins of Kunark expansion and Scars of Velious expansions from April and December 2000. There’s a timeline showing when updates are scheduled to arrive – expect Plane of Fear in January 2020, and Plane of Hate in April.

That said, Project 1999 won’t go without a few mod-cons. At launch there will an achievements system so progression is more tangible. As there will likely be a flood of new players on launch day, the spawning of monsters (or ‘mobs’) will be quicker, so you won’t have to wait ages for your turn to kill a vital villain.

WoW fans may remember the legal spats around vanilla WoW servers such as Nostalrius which preceded the release of WoW Classic. There’s no such fear for Project 1999 – the team says it’s “unaffiliated with Daybreak Game Company but operating under legal permission” – indeed Daybreak has shared updates of the project on its official blog, which is super cool to see. It’s also a relief – the project has been in the works for an astonishing /ten years/, and it’d be tragic for all that work to disappear under a legal kibosh. 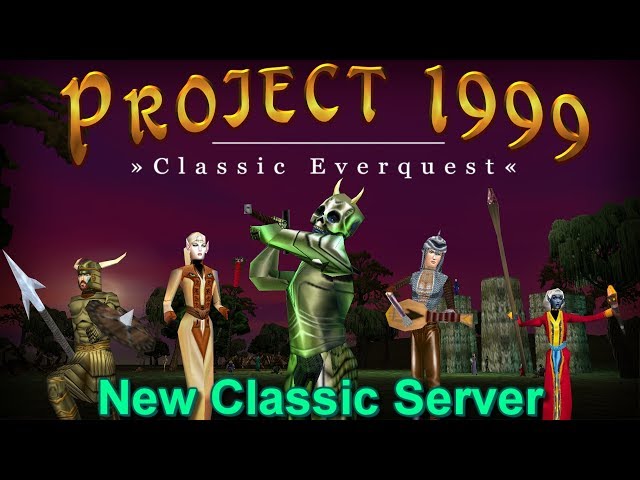 It’s not unusual for fans of MMORPGs to long for times of old. WoW Classic joins Old School RuneScape in being a successful, official remake of the vanilla experience following fans’ clear enthusiasm for the original versions of these epic games which touched so many lives. Everquest’s Project 1999 is another example of fans craving a retro remake – particularly appropriate after celebrating the game’s 20th anniversary this year.

You can learn more about Project 1999 on its website. If you have any other ever-questions, there’s also a forum with a load of updates and plans. Otherwise the server will be live in a couple of days for you to enjoy.