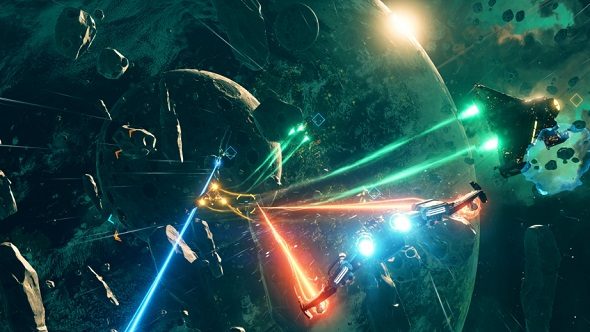 With Everspace preparing to the hyperspace jump from Steam Early Access to Steam on May 26, developer Rockfish have released the final pre-release update for its space-faring roguelike. Adding in a second type of Enhancement, a new missile turret device and an alien race called the Ancients, version 0.7 acts as one last sizeable addition before Everspace’s official release.

Set phasers to fun with these great PC space games.

As is the standard with most mysterious alien races, the Ancients have left a series of structures dotted around the galaxy. By triggering the device found inside these structures, you not only unlock a Glyph—Everspace’s second type of Enhancement—but you activate a shortcut which will fling you into the next sector. Much like the Enhancements you find in derelict stations, these Glyphs upgrade your ship with special powers like the ability to detect more ancient structures.

Along with this new features, version 0.7 finally adds fully animated cockpit displays to all player ships. For the longest time, all of the computer displays in your ship’s cockpit would be static images, ruining the immersion for pilots either flying in cockpit view or using a VR headset to play Everspace. This update also allows players to turn off the HUD while in cockpit view, so they can truly feel they are actually flying a spaceship when playing with in VR. As with any update, there have also been substantial gameplay tweaks and bug fixes which can all be found on Everspace’s website.

Everspace launches on Steam May 26, with it getting a special boxed release within mainland Europe, courtesy of EuroVideo Median and Techland. This boxed version will go for €39.99, while the digital edition currently goes for $29.99/£22.99/€27.99 on Steam. Rockfish have also announced a partnership with ASUS, where Everspace will come free with specific ASUS motherboard or graphics card sold between April 13 and June 18.