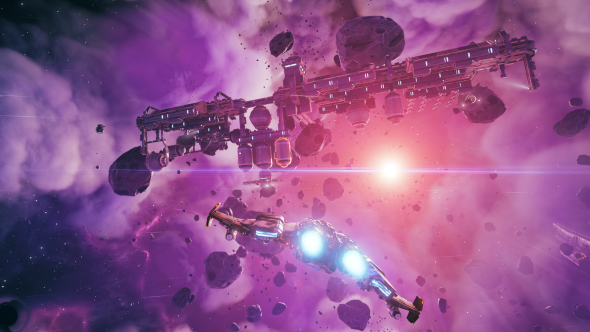 Star Citizen and Squadron 42 are the flight-of-fancy, do-everything space sims that Chris Roberts fans first imagined when playing Wing Commander in 1990. But Roberts also leaves another legacy: an intergalactic combat and trading RPG named Freelancer, finished after his departure from Microsoft’s Digital Anvil 16 years ago.

Freelancer eschewed simulation in favour of immediacy – planets you could reach without half an hour’s cryogenic sleep, and dogfights that left you breathless and oddly oriented. Everspace is its colourful, contemporary German offspring.

“You could say certainly we picked it up where Chris left,” says Rockfish co-founder Michael Schade. “He went on to make the ultimate space game. But because of the competition of Star Citizen and Elite and now No Man’s Sky, we had to and wanted to be different.

“We wanted to have a space shooter that feels more like an arcade shooter. You fly out of your hangar and then you get action right in your face within seconds. There is no place in the game that takes longer than a minute to travel to.”

Rockfish’s modern-day Freelancer comes wrapped in an FTL structure, so its sessions are bitesize too. A roguelike run through its sectors never takes longer than 90 minutes – though Schade suggests it’ll take somewhere between 20 and 40 hours to end the game in anything other than an explosion.

“If the odds are against you, the session can be over within a few minutes,” he warns. “[But] we wanted to make sure it’s not too long. If a run in a roguelike takes you too long, you start worrying too much about dying.”

Schade believes roguelikes can be off-putting. He knows first hand, in fact: when his team first presented the concept for Everspace, he wasn’t excited “at all” about the idea of constantly dying and starting again from scratch.

Then, two things happened: first, he played Shadow of Mordor, which offers a trickle of XP even as you’re trounced by the same orc over and over. And second, he saw Edge of Tomorrow. 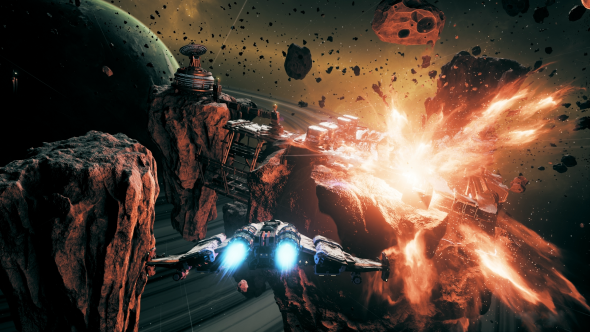 “Tom Cruise constantly comes back, [but] in a linear way,” he enthuses. “I said, ‘We can do this game, but I want us to also tell a story with really interesting, thoughtful, creative characters and such’.

“We thought a lot about how to implement that, and we found a way to make it believable that you are reborn, have another life, but learn all the time. We don’t tell you who you are in the beginning – you have to find out.”

Schade is hopeful they’ve found the fictional wrapper to sell the undecided on roguelikes – and that roguelike fans will appreciate the efforts they’ve made to push the narrative envelope.

There’s a reason Rockfish know how to make Everspace so concise, so contrary to its contemporaries. The studio emerged from the mobile world, where they found success building space games brief and brightly-coloured enough you could play them on the beach with the sun in your eyes. 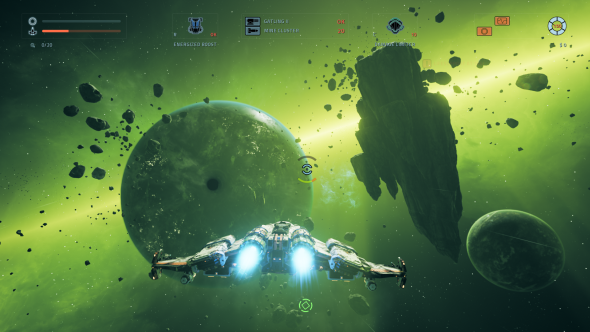 That approach to palette bleeds into Everspace too. Its arresting sector environments switch between ship graveyards and dense, obelisk-like asteroid fields. And by space standards, they’re unusually busy.

“We know that space doesn’t look at all as it does in Everspace, but we say, ‘Well, actually we don’t care,’” Schade explains. “This is all about the looks, it’s all about the fun. We all played Fallout 4 a lot, and the way that the environment design is like, ‘The next cool thing is only a few steps away from you’ – that’s something we wanted for Everspace.”

Rockfish’s budget doesn’t allow them a realistic or hyper-realistic art style – instead they’ve followed the lead of their chief technical artist, who was inspired by Guardians of the Galaxy, and taken full advantage of Unreal Engine 4’s capacity for visual effects, punctuating the blackness with crackling lightning storms.

“Unreal is a blast,” says Schade. “In our previous studio we had our own tech which was the right thing to do because [at the time in mobile games] there was no tech available, but it became an uphill battle. Particularly now on PC or console, it just doesn’t make sense if you’re a small team.” 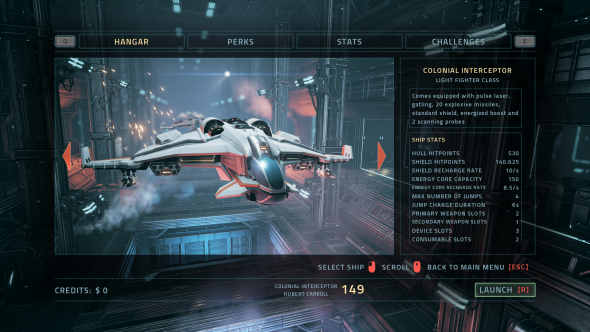 The technical feat that’s captured the attention of Redditors and beta testers is the PhysX-enabled asteroid behaviour; players can break apart bit by bit for ore, gas and crystal. But Rockfish aren’t so foolhardy as to let that enthusiasm compromise the smart systems they’ve put together for Everspace.

“Of course we get from fans, ‘Oh, how about every asteroid is spinning and you can voxel every asteroid,’” Schade laughs. “That for starters would turn the game into a slideshow. And secondly, if you could mine any asteroid, then mining would become pointless.”

It’s about the looks. It’s about the fun. But Rockfish are determined to deliver a tight and satisfying FTLancer roguelike to fill a void as well.

In this sponsored series, we’re looking at how game developers are taking advantage of Unreal Engine 4 to create a new generation of PC games. With thanks to Epic Games and Rockfish Games.