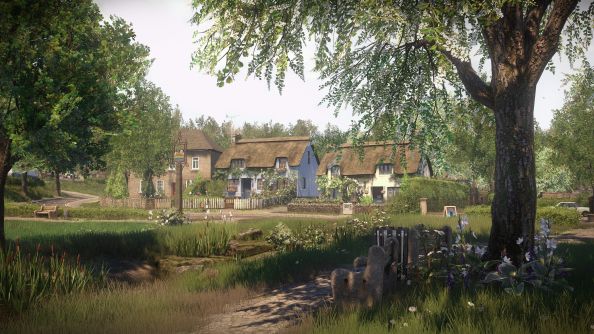 Update 1 Apr, 2016: The Chinese Room have confirmed that Everybody’s Gone To The Rapture is coming to PC, though not when.

Believe the leaks! Everybody’s Gone To The Rapture PC, after having first been hinted at by SteamDB and then further prodded by AMD, has been officially confirmed by developers The Chinese Room. They haven’t got a date for us yet sadly, but now we do know that it is, definitely, happening.

If it had landed on PC in time, Rapture could have easily been one our favourite games of last year.

It's been the worst-kept secret, but it's now official… Rapture will be coming to PC! No release date yet, but we'll keep you posted!

Worst kept secret is right, rumours first swirling back in December. Despite Sony funding the project, there’s always been an assumption that it would make the leap eventually, what with how easy it is to port from PS4 to PC compared to previous generations and it happening with numorous other ‘exclusive’ titles. If you’re wondering, I personally thought the game was quite good, and well worth the evening I spent at a friend’s house slowly exploring its friendly representation of deserted England. Certainly not an action-packed thriller, but well worth your time for a group of great character stories told in an imaginative way.

Update 29 Mar, 2016:After hanging out on SteamDB for a while, Everybody’s Gone To The Rapture PC has popped up again in AMD’s patch notes for a new driver.

The worst kept secret in PC port development history, Everybody’s Gone To The Rapture, has once again had a tantilising slice of ankle revealed to the crowd. This time it’s AMD to blame, the latest update to their Radeon drivers,16.15.2211, mentioning it as a supported title for Crossfire.

The “Included Highlights” for the driver are listed like this:

You can have a look at and download the driverhere. We’re now at the point where it’s pretty much confirmed the game is in development and coming soon – making it rather odd that nobody’s mentioned it in an official capacity yet. It also seems like quite a ludicrous delay, and I don’t think it will sell as well now as it would have done had it come out earlier this year. We’ve had The Witness since then, for walkin’ fans, and the zeitgeist around Rapture has definitely died down.

Will you get Rapture if and when it comes to PC? If not, would you have three months back? Let us know below.

Original post 8 Jan, 2016:Or should that be Everybody’s Come To The PC? The Chinese Room’s pleasant stroll around the English countryside after some kind of disaster released on PS4 last year to somewhat-fanfare and my personal recommendation. Now it seems like Everybody’s Gone To The Rapture is more likely than ever to arrive on PC sometime soon.

The SteamDB page, which Matt reported on last month as having revealed a huge number of titles that were probably coming to the mother platform, has been updated. This is significant because, while a latent SteamDB page could be for a cancelled or unconfirmed title, one that’s actively updating usually means something’s afoot. In this case, this image was added, along with some additional strings:

Hopefully this also means all those other games in that leak, including Final Fantasy X/X-2 and the Danganronpa games, will be making it at some stage too. What console games from the recent past would you like to see make the jump?