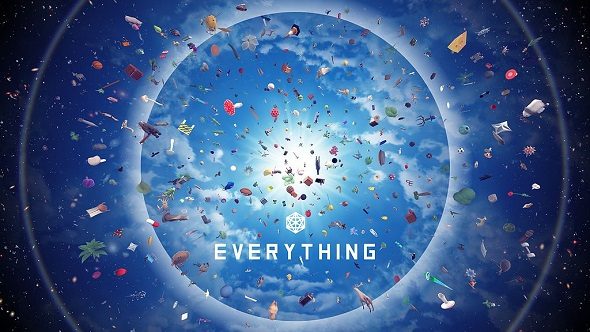 From the mind of Mountain creator David OReilly, Everything is one mind-bending game. Rather than simply exploring new planets or galaxies in a procedurally generated universe, Everything allows you to literally become one with that universe. Starting as the smallest sub-atomic particle, Everything has players gradually hopping from object to object, growing in size and changing form until they become everything.

If you’re looking to explore giant open worlds, have a look at this list of top PC sandbox games.

It does sound confusing but Everything makes sense in practice. Every time you inhabit a new object, whether it’s a dog, a rock or a planet, it gets added to your in-game encyclopedia. Your goal is eventually fill up this encyclopedia so you essentially have knowledge of ‘everything’ within this simulated universe.

Once you have inhabited a certain object, you can then summon at any time so if you want to be a planet rolling down a city street, that’s possible. Once you get out into space, you can fill it full of giant saxophones and shoals of fish if you want. While there is a loose goal in Everything, it’s mainly a playground where players can create as normal or as surreal a universe as they desire.

Combine this free-form exploration with Everything occasionally playing quotes from the British philosopher Alan Watts, and you’ve got a game which is quite unlike anything you’ve probably played before. Even if you don’t quite get what is going on, you’ll most likely be compelled by its rolling animals, relaxing score and bizarre end-game where you can see galaxies flying alongside flocks of birds.

It’s fairly cheap to become one with the universe as well, with Everything currently being on sale for 20% off on Steam, costing $11.99/£8.79 until April 26. I wish you could buy everything on Steam for only £8.79. That’d be some great value.