Evolve is a four-versus-one multiplayer hunting game set on an alien planet teeming with carnivorous plants, carnivorous animals and one absolutely massive carnivorous boss monster. Four fifths of the time you’ll be cast as one of the four human hunters whose job it is to track, trap and kill the free roaming gargant in first-person. On the fifth-sized wedge of a game that’s left, you’ll be playing in third-person as the boss creature itself, an animal who must at first evade detection, feeding on wildlife until such time as you can evolve, grow stronger and take on the human task force bent on your destruction.

Imagine something like Cabela’s Big Game Hunter, except one lucky player gets to control the deer, and he’s an angry, giant deer with the ability to leap over buildings, jump out of trees and crush hunters under its massive hoof. That’s essentially what Evolve is all about. It’s a lot of fun.

There’s a generous wodge of Turtle Rock genetics smeared all over Evolve. In many ways this feels like a Left 4 Dead sequel, a four-player co-op survival game spun out into science-fiction and sent into deep space. The demonstration features just one of the many boss monsters planned for inclusion in the final game — a grey-skinned and muscle-bound alien gorilla thing called Goliath — but encounters with the creature are starkly reminiscent of scenes in Left 4 Dead in which your team is battered and scattered by the raging Tank character, that game’s most fearsome and powerful zombie enemy. 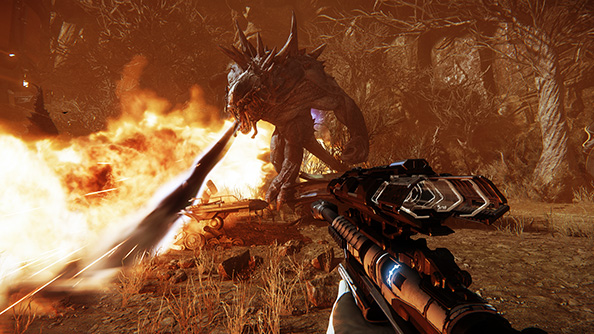 So communication and co-operation is as crucial in Evolve’s jungle as it was in the disaster stricken environments of Left 4 Dead. Far more crucial, even, as Evolve’s team of human players is divided into four distinct classes — assault, medic, support and trapper — whose set of abilities must be properly deployed and combined against Goliath in order to murder him to bits. The trapper can cast a huge, temporary yet impenetrable dome around a large area of the battlefield, forcing Goliath into combat whether he’s ready to fight or not. The trapper can also harpoon the monster to prevent it leaping to higher ground.

Similarly, the medic’s tranquiliser gun will slow Goliath down and highlight its outline to other players. The medic, naturally, can also heal allies from a distance with a Team Fortress 2 styled flexible healing beam. The assault character’s job is to get in close and dump as much ammunition into Goliath’s guts as he possibly can, while the support class can call in a slowly recharging and inaccurate airstrike, should they reckon that the monster is incapacitated enough to stand still in the target area for the next five seconds. The support character can also cast a shield on to a single ally at a time, rendering them mostly invulnerable as long as they don’t break line of sight. 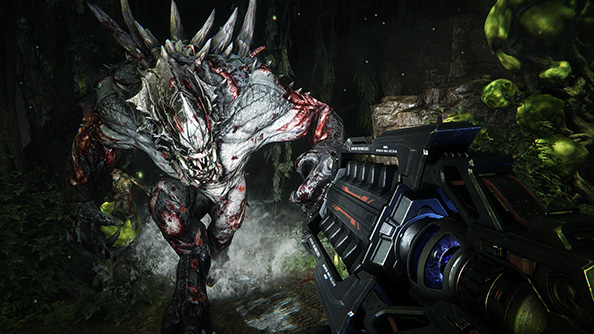 These abilities all overlap and inter-operate and generally confound an unprepared Goliath player. The support might shield the rifle-toting assault character between the Goliath’s legs, while the trapper harpoons the monster in place, preventing him from lunging at the support character, all while the medic jetpacks around higher ground spunking health at anybody who needs it. In practice it turns these flashpoints into convincingly scrappy fights, like King Kong swatting at bumblebee-sized bi-plane pests. It really does engender a well balanced boss fight, with the four pesky humans whittling down Goliath’s giant health bar as much as possible before the dome evaporates and the beast can scamper back off into the jungle, bruised and that much closer to defeat.

Goliath moves much more quickly than the humans and is capable of leaping great distances. You can hold down an Assassin’s Creed button to free-run up cliffs and along branches, your general goal being to put as much distance as possible between you and your pursuers, all the while eating wildlife to fill a progress bar towards the next of your three evolutions. With each evolution you double in size and gain a new power: Goliath’s are charging (see Left 4 Dead 2’s Charger), leaping (see Left 4 Dead’s Hunter), rock throwing (see Left 4 Dead’s Tank) and flame breathing (fair enough). 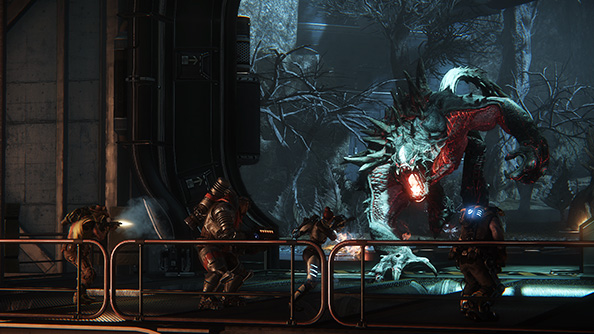 Everywhere you go you leave tracks that the hunters can follow. Small flocks of indigenous birds can be startled too, giving away your position, and the trapper’s sound-activated beacons will trigger as you gallumph past them, again notifying other players of your location. You can duck into a sort of stealth mode however, which greatly reduces your natural grunting sounds and prevents you leaving your telltale tracks at the expensive of vastly reduced movement speed. You’re a noisy thing, though with some luck and guile it’s possible to outwit and outmaneuver the human players, avoiding them until you’re prepared to fight them on your own terms.

As the beastly opponent, and especially early in the round when you’ve not yet reached your full potential, you can lure the hunters into areas occupied by some of the nastier wildlife the arena has to offer. Huge crocosauri almost as large and as angry as Goliath will one-hit incapacitate any human players clumsy enough to get too close. 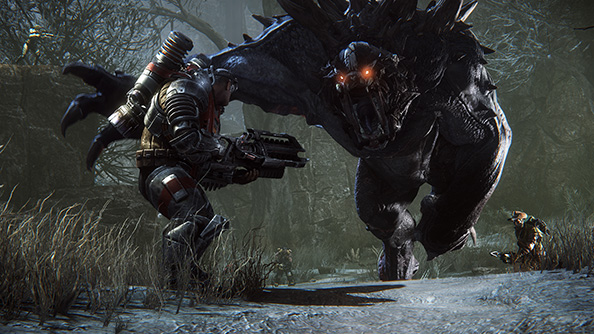 Once you’re fully evolved however, you can confidently storm into battle with the now teensy by comparison humans, pouncing on them, grabbing them and violently pounding their tiny idiot bodies into the ground. As with Left 4 Dead, players can be incapacitated a limited number of times before they’re down for good, though any other character can revive a fallen ally, given the chance.

As development continues, Goliath’s peers will be revealed, with the studio hinting that not every boss will be so reliant on brawn. Some may not even physically grow with each evolution, suggesting that the role of the monster isn’t always necessarily a dumbly aggressive one.

Though Turtle Rock have only shown a single boss character, Goliath, in a single level, an Avatar-y junglescape, there’s already a clear dynamic and a deeply tactical game here. The 15 minute long rounds flip from tense, patient moments of prey-stalking to all out carnage, barked instructions, hastily deployed defences and frantic four-on-one pile-ons. That this totally asymmetric combat is even seemingly balanced can already be counted as a triumph for Turtle Rock, whose pedigree in co-operative shooters, and really big angry monsters, is now soon to be properly established.